Turkey's PM dismisses general amnesty for now, saying "This can only be a promise for the period after 2011 elections." 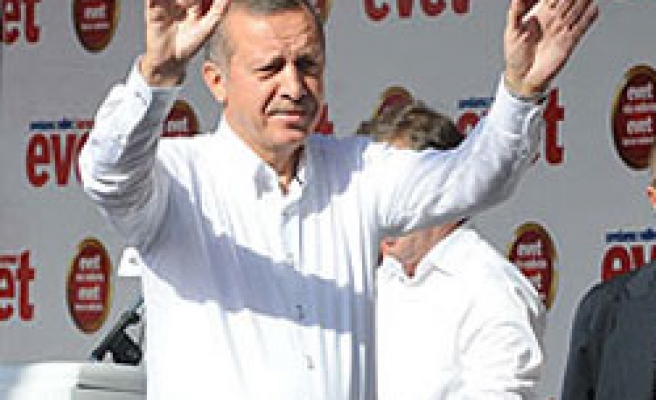 The Turkish prime minister said on Saturday that the proposal on a general amnesty could only be a promise for the period after 2011.

Speaking at a TV program broadcast by private TV channel Kanal 24, Prime Minister Recep Tayyip Erdogan said opposition parties did not discuss the content of the constitutional amendment package, but they brought up issues that were not relevant to the package.

"For instance, the general amnesty issue. Is there any clause on general amnesty in the constitutional package? Why do they deliver statements on this issue then?," Erdogan said, pointing to Republican People's Party (CHP) chairperson Kemal Kilicdaroglu's recent remarks on the matter.

"First of all, you do not have the right to declare general amnesty in this country. Who gives you this authority?," the prime minister said, and added that the Turkish parliament would not approve such a proposal.

"This can only be a promise for the period after 2011 elections. It is something like bribery," Erdogan said.

"No talk with PKK"

Erdogan also noted that the general amnesty issue had been voiced in Turkey's eastern and southeastern provinces deliberately as there was a high demand for an amnesty in that region.

Commenting on the stance of several NGOs in Turkey's southeast regarding the upcoming referendum, Erdogan said such organizations said that they would use their democratic rights and vote "Yes" for the constitutional package.

"This is a very brave stance. I congratulate these NGOs for their attitude," Erdogan noted.

The prime minister also said that the state would take all the necessary precautions to enable the nation use its democratic rights in a safe atmosphere at the upcoming referendum.

Regarding recent remarks which claimed that the government held talks with PKK, Erdogan said the political will would never sit at a table with the terrorist organization, however, the state's intelligence agency could hold talks with everybody anytime, anywhere.

"Nobody can say that this ruling party has held talks with members of the terrorist organization. No one can prove such a thing," Erdogan said.