Turkey's PM refused to send military proposal to promote a general called to testify in a coup probe, an unusual move for Turkish politicians. 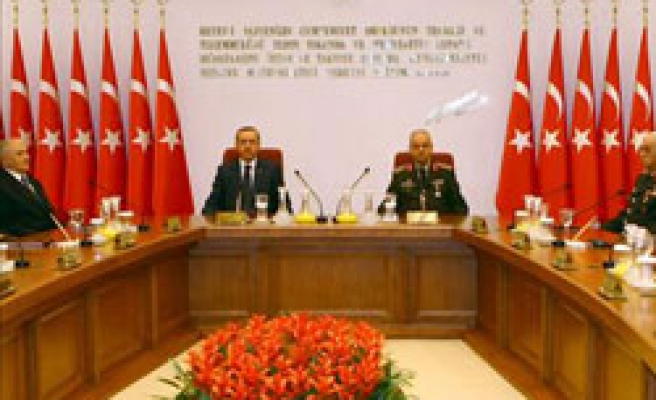 Turkey's PM refused to send military proposal to promote a general called to testify in a coup probe, an unusual move for Turkish politicians.

Turkey announced promotions for senior brass on Wednesday, but left the top posts of head of the armed forces and commander of ground forces unfilled amid coup investigations into senior officers.

An ongoing investigation into an alleged plot to overthrow Prime Minister Tayyip Erdogan's government in 2003, known as "Operation Sledgehammer", had cast doubt over senior army promotions decided by the Supreme Military Council, which began a twice-annual meeting on Sunday.

The council had been expected to appoint General Isik Kosaner, the current ground forces chief, as chief of staff for NATO's second largest armed forces when General Ilker Basbug steps down at the end of August.

The state-run Anatolia news agency, which reported the promotions, said Basbug would retire as planned.

The general in line for the post, Hasan Igsiz, was one of 19 officers summoned earlier this week to testify in a probe into a campaign to discredit the ruling AK Party and Islamic groups on the internet.

Igsiz, commander of the prestigious First Army, had been tipped to succeed Kosaner as head of the Turkish land forces. But while the council was in session, a state prosecutor summoned Igsiz and 18 other officers to give statements on "Internet Memorandum", internet websites created in order to wear out the government.

Gen. Hasan Igsiz will give testimony as "suspect" in Ergenekon case on claims over the document which was allegedly signed also by Igsiz.

Though Erdogan has curbed its powers through reforms introduced to support the country's bid to join the European Union, the military is still an influential force.

The government traditionally has lacked significant influence over the military-dominated 15-member council, as decisions are taken by majority vote, though Erdogan chairs the council and Defence Minister Vecdi Gonul sits on it.

But, for the first time, Premier Recep Tayyip Erdogan did not send the military's proposal to promote Gen. Hasan Igsiz as the Land Forces commander, to the presidential palace for approval. Therefore, the appointment of the new Chief of Staff was also not made.

"No promotions for suspected officers"

Separately, arrest warrants in connection with "Sledgehammer" have been issued for 11 other senior officers who were up for promotion. None of those figured on the promotions list released by Anatolia.

Turkey's military staged three coups between 1960 and 1980 and pressured a fourth government to resign in 1997 in a so-called most-modern coup.

The promotions panel normally uses its reviews to fire the devout among its officer corps, but unusually there were no expulsions announced this time.

According to newspaper reports, President Abdullah Gul, who signs off on the promotions, had told Basbug before the council convened on Sunday that promoting officers under investigation would send a wrong message.

The alleged "Sledgehammer" plot involved bombing mosques and triggering conflict with Greece in order to destabilise Erdogan's government. The military says "Sledgehammer" was merely a wargame exercise presented at a seminar. Trials in the case are expected to commence later this year.