A court in Ankara has unveiled the transcripts of the National Security Council (MGK) meeting on the date of Turkey's post modern Feb 28,1997 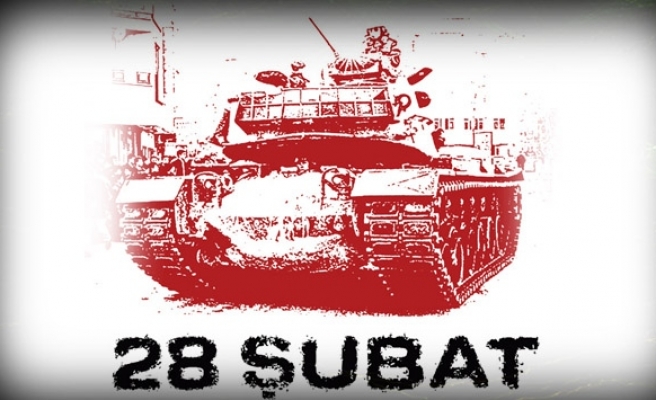 A court in Ankara has unveiled on Monday the transcripts of the National Security Council (MGK) meeting on the date of Turkey's post modern February 28,1997 coup that forced former Prime Minister Necmettin Erbakan to resign.

The transcripts advised the government to take measures against radical Islamist groups who were opposed to a secular and social state of law and aimed to establish an Islamic Republic based on sharia in Turkey.

The decisions made by the National Security Council are as follows:

-Radical Islamist groups aiming to establish an Islamic Republic based on sharia pose a threat against a democratic and secular state of law, Turkey.

-Those radical groups attempt to weaken Turkey by discriminating between secular and anti- secular people.

-Secularism in Turkey provides democracy and a peaceful lifestyle.

-Turkey will never give up being a state of law and old-fashioned implementations carried out by ignoring laws do not comply with supremacy of law.

-Measures to be taken against the threats to topple Turkish Republic are as follows :

-Secularism, one of the Turkish Republic's fundamental principles must be protected sensitively, current legislations must be carried out and if needed, new regulations must be made,

-Private dormitories, foundations and schools associated with religious sects must be brought under control by the state.

-Students must have an eight-year of continuing education.

-Necessary administrative and legal regulations must be carried out for Qur'an courses under the control of the Ministry of National Education.

-Practices of religious sects must be terminated.

-Implementations regarding laws in clothing that will present Turkey as old fashioned must be prevented.

-Attempts to solve the country's problems with the notion of "Islamic ummah" and  those who support terrorist organizations must be prevented.

-Those who abuse laws and disrespect Ataturk, the founder of Turkish Republic, must not be given any opportunities to do so.

The measures listed above were only a part of the overall measures.

The National Security Council made a total of 18 decisions during a 9-hour long meeting on Feb. 28, 1997 and presented them to Erbakan for approval. He was forced to sign the decisions. He subsequently resigned, handing over the Prime Ministry to his coalition partner, True Path Party leader Tansu Ciller. However, then-president Suleyman Demirel handed over the duty to form new government to Motherland Party leader Mesut Yilmaz. He formed his government with Democratic Left (DSP) and Democratic Turkey Party (DTP). DTP was constituted by resignations from True Path Party, which was pressed hard by media and judicial circles. Also, the Welfare Party that Erbakan led was banned by the Constitutional Court as a result of accusation for violating the principle of secularism in the constitution. During the infamous process many steps, that are interpreted as a setback for religious circles, were taken such as restrictions on graduates of Islamic schools entering into universities and expulsion of conservative people from public service.

In 2012, the Ankara Chief Public Prosecutor's Office launched an investigation into the coup. The office prepared a 1,300-page indictment that was accepted by the Ankara 13th High Criminal Court. 103 suspects, including Former Chief of General Staff Ismail Hakki Karadayi, was asked to defend themselves on accusations of “overthrowing the Turkish government by force.” Turkish army had overthrown three administrations in 1960, 1971 and 1980.