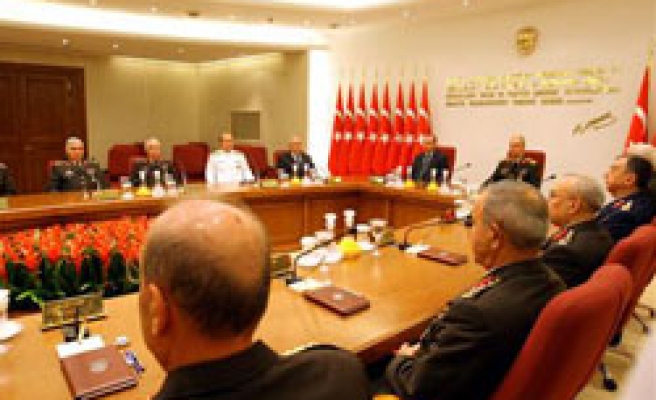 The Supreme Military Council, Turkey's highest military decision-making organ, has convened on the second day of its annual gathering amid arrests warrants under an investigation into an alleged coup plan known publicly as "Sledgehammer".

During the four-day meeting, the new command echelon will be determined.

11 generals who are among suspects of the Ergenekon, Cage and Sledgehammer coup probes, expect "promotion" from the Supreme Military Council.

Turkish media suggested that "Prime Minister Recep Tayyip Erdogan objected to those promotion of general suspects, but the military insisted." "The crisis could not be overcome during the first day debates."

Media said, Gul told military head that "it would be wrong to promote the suspects who were about to be arrested."

Two of 11 general suspects got promoted in the meeting, decisions on other 9 suspects will be made on Monday.

But none of the suspects has not surrendered to police yet for more than a week.

Military officers whose names are mentioned in the document will not be eligible for promotion at the YAS meeting.

The decisions made by the council will be made public after being submitted to the Presidential Office for approval on August 4.

However, media said, Turkish President may reject some YAS decisions on the appoinments of suspected generals in coup probes.

The Council was set to appoint General Isik Kosaner, current head of the land forces, as head of the armed forces. The government was not expected to object to this appointment.

Regarded as a staunch secularist, Kosaner also previously served as head of the paramilitary gendarmerie forces. He will replace General Basbug at the end of August.

Kosaner will oversee the campaign against an upsurge in PKK attacks.

He has rarely spoken publicly about issues like "Sledgehammer", and his words will be closely scrutinised.

University professor Ihsan Dagi, who is married to an AK Party deputy, said the promotions process gives the impression of going beyond a change of military command.

"This is partly true, simply because generals do not only command troops but lay a claim to commanding Turkey," Dagi said in a column in Today's Zaman.

He said that Erdogan and the defence minister did not have a significant influence on the decisions of the military-dominated 15-member council, where decisions are taken by majority vote.