Turkish General Staff said on Tuesday that the proposal for a change to protocol came from the newly appointed chief of General Staff. 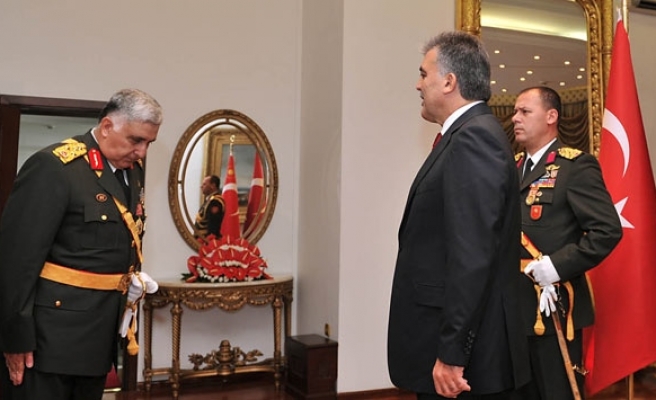 In response to a recent debate over a new protocol implemented during this year's Victory Day celebrations in which the president receives greetings as the commander-in-chief of the military as opposed to past practice, the Turkish General Staff said on Tuesday that the proposal for a change to protocol came from the newly appointed chief of General Staff.

The General Staff said in a written statement on Tuesday that the new protocol was adopted since the former practices in which the General Staff received greetings were not appropriate. The statement further said Chief of General Staff Gen. Necdet Özel conveyed to Prime Minister Recep Tayyip Erdoğan and President Abdullah Gül that it would be more appropriate for the president to receive greetings on behalf of the Turkish nation during national holidays and as the commander-of-chief on Victory Day. "This proposal was accepted and implemented," the statement said.

President Gül said before this year's Victory Day, which is celebrated on Aug. 30, that he would receive greetings and congratulatory messages during official ceremonies, contrary to previous occasions in which the chief of the military received greetings. Gül said the proposal for this change came from newly appointed Chief of General Staff Gen. Necdet Özel. "This was a suggestion put forth by the chief of General Staff in a meeting we had ahead of the latest National Security Council [MGK]. I also approved it. This is what will be done from now on," he said.

As a first in the history of Turkey, Gül received greetings as "the commander-in-chief" of Turkey, a constitutional title for the president of Turkey, on Aug. 30. The Victory Day is an official holiday in Turkey, which marks the victory in the final battle of the Turkish War of Independence in 1922.

Gül greeting well-wishers has been another step in Turkey's ongoing efforts towards civilianization and further signals the end of the military's influence over civilian authority.

Another recent signal of normalization in civilian-military ties was in early in August, when in a Supreme Military Council (YAŞ) meeting and contrary to previous practice in which Prime Minister Recep Tayyip Erdoğan sat beside the chief of the armed forces, the prime minister sat alone at the head of the table, which was interpreted as a symbol of civilian authority over the armed forces.

In mid-August, the seating order at the MGK -- civilians on one side and soldiers on the other side of the table -- was also changed. Members of the MGK took their seats in accordance with state protocol during a meeting on Aug. 18.