The clashes in Turkey's Hatay province, where smuggling of fuel and other goods has continued for years, have raised questions about their increase in recent months. 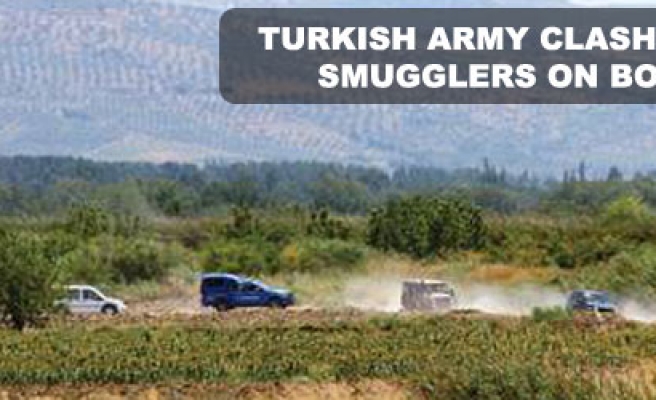 Turkish troops returned fire after coming under attack along the Syrian border overnight as more than 1,000 alleged smugglers, including 150 on horseback, tried to cross into Turkey from Syria, the military said.

The incident on Turkey's long Syria frontier, where tensions have been on the rise over the past couple of months, follows a string of similar confrontations between Turkish soldiers and hundreds of people described by the military as smugglers.

The clashes in Turkey's Hatay province, where smuggling of fuel and other goods has continued for years, have raised questions about their increase in recent months and about why smugglers would operate in such large numbers.

In one incident last week, the Turkish military said up to 3,000 smugglers had tried to cross the frontier.

Syrian refugees fleeing from the civil war in their homeland often cross over the porous frontier in large numbers and Turkish officials have conceded smugglers sometimes intermingle with the refugees to use them as cover.

Turkey is housing more than 400,000 Syrians on its soil and is struggling to provide shelter for them fast enough but denies it is turning them away at the border, saying it continues to operate an "open door" policy.

The military said it spotted 750-1,000 people on foot, a separate group of 150 people on horseback, and some 40 vehicles forming a line around 300 metres (yards) along the border near the Turkish village ofKusakli in Hatay's Reyhanli district.

The troops deployed armoured vehicles and a tank along the frontier to block the group from crossing and issued warnings in Turkish and Arabic to try to keep them back, the military said.

Despite the warnings, the groups continued to approach the border with the "attempt to engage in smuggling".

The security forces then intervened, it said, without elaborating. Some 15-20 rounds were fired with a pump-action rifle from Kusakli, prompting the soldiers to return fire.

Following the army's warning shots, the smugglers left the area and 35 containers of petrol were found, the military said.

With its hilly terrain and thick vegetation, Hatay, a panhandle province that juts down into Syria, makes a relatively easy crossing point for smugglers, as well as Syrian rebel fighters and refugees fleeing the fighting.

Turkey has emerged as one of the strongest backers of the Syrian rebels fighting to oust Syrian President Bashar al-Assad, giving them sanctuary on its soil, but it denies arming them.

As the violence has spilled over, however, Ankara has become increasingly concerned about the fallout of the civil war and has moved to tighten security along the frontier.

In the worst example of the spillover into Turkey, 52 people were killed when twin car bombs ripped through the border town of Reyhanli in May. Turkey has accused Syria of involvement in the attacks, but Damascus has denied any role.

Several Turkish citizens have been killed since then by stray bullets fired from the Syrian side. The incidents have stoked unease among Turks along the border most affected by the turmoil in Syria with some taking to the streets in protest.