"The package is expected to be taken up at the cabinet meeting next Monday," the ministry official said. 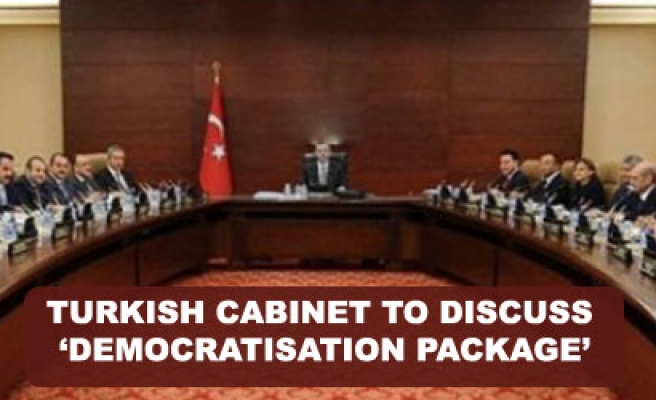 Turkey's government is expected to begin debating a package of long-awaited reforms next week aimed at bolstering Kurdish rights and boosting democracy, a step which could help keep a fragile peace process on track.

The cabinet will discuss the "democratisation package" - whose proposals range from wider Kurdish-language education to changes to anti-terror laws - at its meeting next Monday, a senior justice ministry official told Reuters.

At stake is a bid to end a three-decade conflict with militants from the Kurdistan Workers Party (PKK) in which more than 40,000 people were killed. Abdullah Ocalan, the group's jailed leader, declared a halt to hostilities in March after months of talks with the state.

That ceasefire has largely held, with his fighters beginning to withdraw to bases in the northern Iraqi mountains in May, but the PKK has said clashes could resume if Ankara does not take concrete steps by the start of September.

Prime Minister Tayyip Erdogan has invested much political capital in the process, which has enjoyed strong public support but is increasingly attracting fierce nationalist criticism over perceived concessions to militants officially deemed terrorists.

The justice ministry has presented to Erdogan its report on the reforms and the prime minister's office was preparing its own report on the package, encompassing a range of "pro-democracy" steps including boosting minority rights.

"The package is expected to be taken up at the cabinet meeting next Monday," the ministry official said.

Last week, Erdogan said parliament may reconvene early from its summer recess to pass laws to expand Kurdish rights. It is scheduled to start on Oct. 1, but media reports indicate it may reassemble in mid September.

The delicate peace process has taken on an additional urgency for Turkey as Kurdish militias fighting in neighbouring Syria's civil war push for greater autonomy for parts of northern Syria, just over the border.

The justice ministry report focuses on technical matters while Erdogan's office was dealing with more sensitive political issues, such as the 10 percent threshold of votes parties need to enter parliament - a level which Kurds want lowered.

Other reforms under discussion include the reopening of the Halki Greek Orthodox seminary on an island near Istanbul, removing restrictions on the wearing of Islamic headscarves and boosting the rights of the Alevi minority, the official said.

Also under consideration were changes in the law regulating public meetings and protests, and ending the prosecution of suspects as terrorists if they are not in a militant group's hierarchy and have not been involved in violent acts, he added.

While the planned reforms are wide ranging, the peace process is seen as the key motivation for the package.