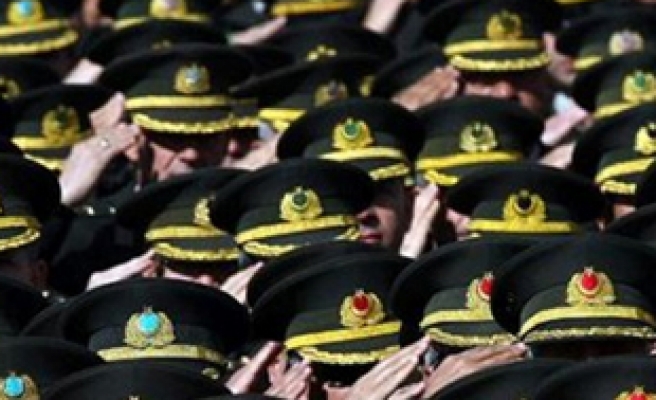 A higher court in Turkey upheld Wednesday prison sentences for more than 230 military officers including two force commanders in a trial on an alleged military coup plot back in 2003.

The Supreme Court of Appeals also approved the acquittal of 36 in the coup plot case dubbed as "the Sledgehammer" while overturning the convictions of 88 officers.

Those whose sentences upheld by the court include retired gen. Cetin Dogan (73), commander of the esteemed First Army; former air forces commander gen. Halil Ibrahim Firtina (70); retired admiral Ozden Ornek (70), the former commander of the naval forces; and retired general Engin Alan (68) who was elected to parliament in 2011 as a member of the opposition Nationalist Movement Party.

Cetin Dogan, Ozden Ornek, Ibrahim Firtina were sentenced to 20 years prison terms while Bilgin Balanli, Engin Alan, Ergin Saygun, Mehmet Otuzbiroğlu, Nejat Bek, Suha Tanyeri, Sukru Sariisik, Cemal Temizoz were also sentenced to 18 years in prison each.Those generals are going to strip of their ranks and will be degraded to private. They and their families will be deprived of all military benefits.

After the ruling, Cetin Dogan’s lawyer told an Anadolu Agency correspondent that they will appeal to the Constitutional Court to reverse the verdict.

"If we do not receive a positive decision from that court, we will appeal to the European Court of Human Rights on the basis of fair trial," Huseyin Ozden said.

Meanwhile, the ruling party welcomed the verdict with a deputy prime minister saying that the decision constituted an important milestone to face past military coups in Turkey.

"We dream such a country that no one will dare to create an extraordinary era or to contribute to that end," said Kurtulmus.

Retired general Dogan was accused by the court as the architect of the infamous plan and tried as the chief suspect. He also stands trial for what has come to be known as the 28th February Process, a 1997 military-led campaign that forced then Prime Minister Necmettin Erbakan to resign and accept a series of far-reaching restrictive measures aimed at conservative segments of the society. Dogan is accused of leading the infamous West Working Group that has allegedly drafted those measures.

Retired Admiral Ornek is known by public as the person who kept a dairy on the secret coup plans surfaced after being published in a Turkish newspaper.

Another high profile figure from the case is retired general Engin Alan who served as the commander of Special Forces in southeast Turkey. Wednesday’s ruling strips Alan of his MP title.

Sledgehammer ("Balyoz" in Turkish) is an alleged military coup plan by a junta in the Turkish Armed Forces which reportedly dates back to 2003, a year after the ruling Justice and Development Party (AK Party) came to power.

The plot allegedly sought to undermine the government, laying the groundwork for a military takeover.

The convicts are accused of a failed attempt to overthrow the elected government.

According to the plan, the military was to systematically foment chaos in society through sensational plots including bombing of mosques in Istanbul and downing of a Turkish warplane over the Aegean.

The Sledgehammer documents were the basis of a presentation given by the then 1st Army commander during a military conference from March 5-7, 2003 held at the Selimiye Barracks in Istanbul.

According to the court, military officers brainstormed a coup plan during the conference, which the defendants argued was held as part of a series of regular "war seminars."

The Sledgehammer case started on February 21, 2010 with operations in nine provinces during which many people -- including officers on active duty, retired admirals, generals and colonels -- were detained.