Bozdag pays a visit in Kosovo for a series of formal talks and the inauguration of historical sites renovated under grants by Turkey's international cooperation and development agency, or TIKA. 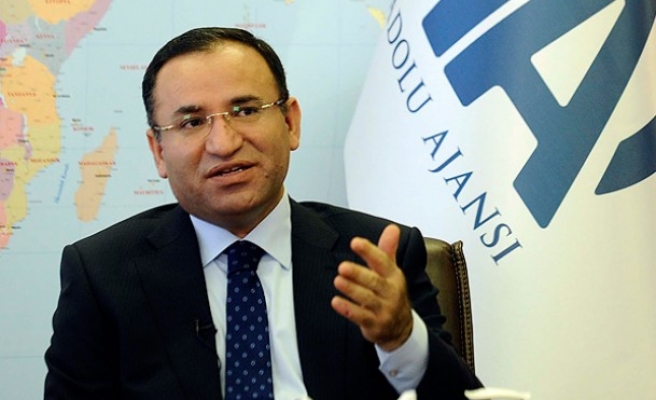 Bozdag said Turkey and Kosovo shared a common history which had seen years of peace and prosperity, adding that the Ottoman past of Kosovo belonged to Kosovars as much as it belonged to Turks.

The tomb renovated by TIKA belongs to Ghazi Mestan, a standard-bearer for Ottoman Sultan Murad I who reigned between 1299 and 1324.

Earlier on Friday, Bekir Bozdag met with his Kosovo counterpart Hajredin Kuci as part of visit in Pristina.

Speaking in a joint press conference after the meeting, Bozdag said Turkey attached great importance to Kosovo's independence, sovereignty and its territorial integrity.

"Turkey considers tensions in north Kosovo as a threat to the peace and stability of the region. And the region would gain a lot from the settlement of those tensions in cooperation with the international community," Bozdag said.
Bozdag said dialogue between Pristina and Belgrade made significant contributions to the normalization of relations between Serbia and Kosovo.

"Tensions in Kosovo's north make no good either to Kosovo or to Serbia and they pose a great threat to entire Balkans and Europe," Bozdag said.

Kuci, on his part, said that Kosovo was grateful for the support TIKA extended for the development of his country, adding that cooperation with Turkey was of utmost importance for Kosovo.

After his meeting with Kuci, Bozdag participated in a meeting to promote projects carried out by TIKA for the renovation of Ottoman-era historical sites and buildings in Kosovo.