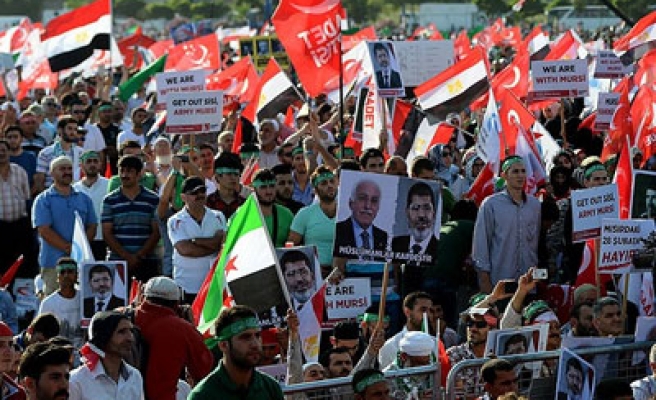 Thousands of SP supporters from nearby Kocaeli, Sakarya, Edirne, Bursa and Yalova provinces gathered in Istanbul's Kazlicesme to protest the military coup.

"Our voice here in Kazlicesme is echoed in Tahrir and Rab'a al-Adewiya squares. This black coup, this dirty intervention, this bloody game is a betrayal to the Egyptian people. History will never forgive it. This coup is a betrayal," SP Chairman Mustafa Kamalak told the crowd.

Deputy head of the party, Temel Karamollaoglu, stressed they had always stood on the side of "oppressed", condemning the coup.

"Injustice was done to Morsi and Ikhwan in Egypt."

The Istanbul protesters sat on rush mats shoulder to shoulder in close mass prayer formation, imitating pro-Morsi demonstrators in Cairo's Rab'a Al-Adewiya Square. Banners were seen that read "Muslims are brothers", a Quranic verse, in Turkish, Arabic, English and Chinese, chanted by also by the crowd.

The meeting was broadcast live for Egyptians in Rab'a Al-Adewiya square.