Protected by Turkish troops, the Suleyman Shah Tomb and surrounding area, Turkey's only exclave, were located in Aleppo's Manbij district, 37 km away from Turkish border. 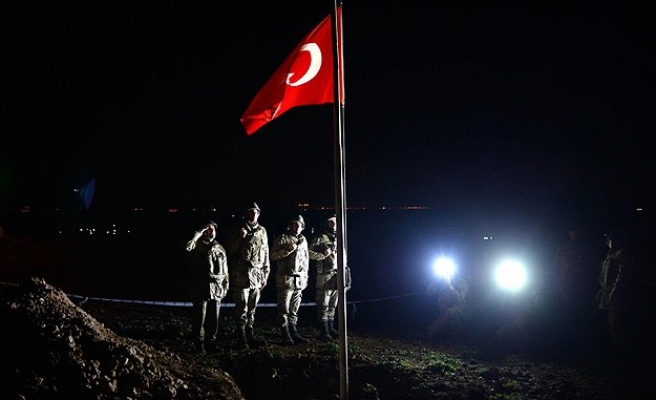 World Bulletin / News Desk
The Turkish General Staff announced on Sunday that Turkey’s precious relics were transferred to a new location in Syria, over which the Turkish flag is flying, and that no Turkish forces, tanks or equipment were left behind.

The Turkish General Staff press office released a statement after relocation the Tomb of Suleyman Shah to a new location and underlined that precious Turkish relics were not left behind.

According to the statement, the Turkish armed forces secured a new area in Syria close to border, hoisted the Turkish flag and promised to protect the exclave.

“Due to the security problems and military necessities in Syria, Turkey’s Tomb of Suleyman Shah and Turkey's exclave in Syria were relocated to a border village in Syria, Esmesi, without prejudice to our rights,” the statement said.

“The new location where the tomb of Suleyman Shah was relocated is fully controlled by Turkish troops and our Turkish national flag was waved,” it said.

The Turkish General Staff also confirmed that one Turkish soldier lost his life after an accident during the operation.

Shah has an important place in Turkish history as he was the grandfather of the founder of the Ottoman Empire.