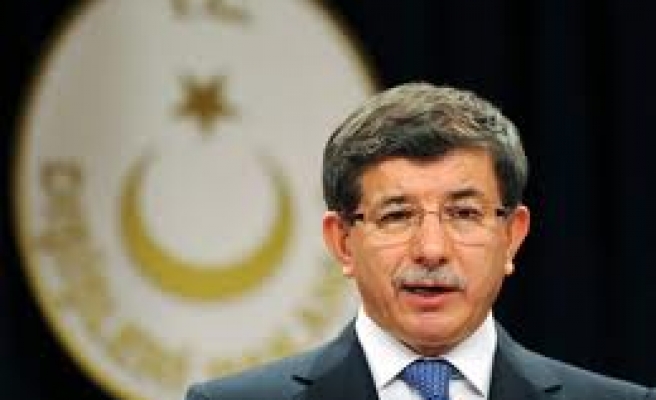 Turkish Foreign Minister Ahmet Davutoglu has said, "Egypt is the spine of every single development in the Middle East," adding that shedding green light to coup would create a negative domino effect in the region.

Davutoglu replied the questions about developments in Egypt during an interview aired live on a national news channel on Monday.

He defined the current period in Egypt as the most critical one since the revolution.

"There are two ways, one is internal and the other is external, that render a government legitimate. This is the main problem in Egypt. 21st century's first great revolution, as it is rightfully called, has witnessed several critical processes until now, but during the past week an internal political legitimacy problem has emerged," said Davutoglu.

He said, toppling the first legitimate government that had manifested itself unchallengedly from the public had caused an internal political crisis.

"In fact, the political legitimacy crisis has emerged last year when the parliament was abolished. Morsi was left alone as the only authority reflecting public will. In fact at that time, those who prepared the coup today took a step to protect the statusquo," said Davutoglu.

Davutoglu remarked that to cover the internal legitimacy gap, external sources of legitimacy were focused in Egpyt, such as declarations by foreign governments, signalling them, "We will soon pass to democracy but for now tolerate us".

Refraining from calling the army takeover as "coup", some of the countries did reply to this demand, said Davutoglu.

"I emphasized one thing when I talked to my collegues that on last Monday and Tuesday during our long talks that Egypt is the spine of every single development in the Middle East. Now if we altogether allow something wrong, it would create a negative domino effect", said Davutoglu, and added, "Giving green light to coup in Egypt would make negative impact on some ex-autocratic regimes such as Tunisia, Libya who would think the international community remained silent, so we can do the same."

Davutoglu called on international community to get rid of the possibility of making negative domino effect through external legitimacy.

Evaluating the EU statement on Sunday to announce army- appointed administration illegitimate, Davutoglu said, "I also shared this with (The High Representative of the European Union (EU) for Foreign Affairs and Security Policy Catherine) Ashton, if legitimate channels are driven out of political sphere, the politics radicalizes," and added that the EU passed a serious test with July 14 statement which was in compensatory manner.

Responding to the allegations that the Muslim Bortherhood would hold a meeting in Istanbul, Davutoglu said, "such a thing is out of question at the moment."

In a bid to correct a similar opinion emerged about Turkey's role in organization of Syrian opposition, Davutoglu expressed that the opinion as if Turkey provided possibility for Syrian opposition to get organized in Istanbul was wrong.

"On the contrary, for months we engaged with Syrian regime, and advised the opposition to be organized within Damascus. We wanted all groups to gather in Damascus. If the opposition had been able to express themselves inside Syria, they would not have searched for another platform," said Davutoglu.

Emphasizing that Egypt was very different than Syria since currently, the opposition were able to get organized in Egypt, Davutoglu said, "In Adawiyya square, millions express themselves. We do not want such a situation to occur in Egypt. Whatever happens must remain within the boundaries of Egypt through appropiate channels. So a meeting in Istanbul is out of question for now."

Davutoglu added, "It is very striking that Morsi, accused of being autocratic, did not close even one newspaper or TV channel, despite their opponent broadcasts, even one protest was not prevented, police did not intervene. However in the past week, all these were reversed."