Gul and Erdogan lined up with other officials and said prayers in front of coffins wrapped in the red-and-white Turkish flag at a mosque in the city as tearful relatives looked on. 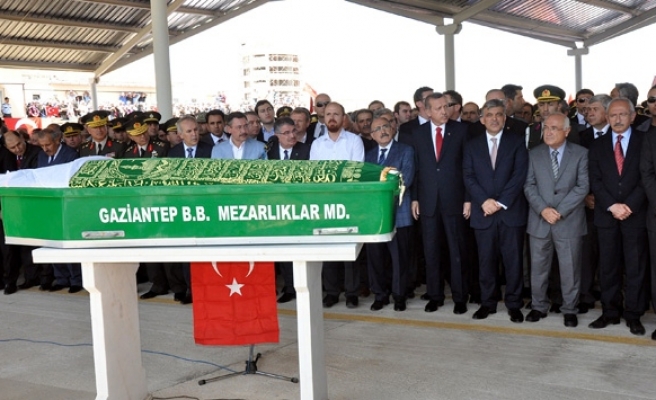 Turkey's leaders called for unity on Wednesday following a car bomb attack which heightened fears that PKK militants are exploiting chaos in neighbouring Syria and stepping up their decades-old attacks.

Unidentified assailants detonated the car bomb by a police station in the industrial city of Gaziantep near the Syrian border late on Monday, killing nine people including several children and wounding more than 60.

The president, prime minister and party leaders gathered in the city at a funeral for the victims of the attack, which came as families celebrated the Eid al-Fitr holiday at the end of the Muslim fasting month of Ramadan.

"The best answer we as a nation can give is to form a (united) front and stand side by side, whatever our differences ... in the face of this act of terrorism," President Abdullah Gul told reporters after arriving in Gaziantep.

Gul and Prime Minister Tayyip Erdogan lined up with other officials and said prayers in front of coffins wrapped in the red-and-white Turkish flag at a mosque in the city as tearful relatives looked on.

No group has claimed responsibility for the attack, but some officials point the finger at the Kurdistan Workers Party (PKK) militant group, whose 28-year-old conflict with the state has killed more than 40,000 people. The PKK denied involvement.

Ankara is also investigating possible Syrian links to the blast, which has fuelled fears that the uprising in Syria against President Bashar al-Assad could add to the instability in southeast Turkey.

A sharp rise in militant violence in Turkey this month has reinforced the belief among Turkish officials that the PKK is receiving weapons from Assad's forces.

Citing a PKK militant arrested by security forces in July, Hurriyet newspaper on Wednesday said the Gaziantep attack had been planned by a PKK member in charge of the group's operations in the region around the southeastern city of Diyarbakir.

Gaziantep, 50 km (30 miles) from the Syrian border, has witnessed little of the trouble which has blighted much of the mainly Kurdish southeast since the PKK took up arms in 1984 with the aim of establishing an ethnic Kurdish state.

"There was never any terrorism here. The people embraced one another. They want to disturb the peace here," said Kemal Kilicdaroglu, leader of the main opposition Republican People's Party (CHP), urging cross-party cooperation to end the violence.

The city, one of Turkey's largest with a population of one million, has enjoyed growing affluence in recent years, thanks to an expanding industrial base and flourishing trade ties with Syria. The conflict across the border has now frozen those ties.

Ankara initially cultivated good relations with Assad's administration but relations have deteriorated since the uprising against him began 17 months ago.

Erdogan has become one of Assad's harshest critics and has raised the possibility of military intervention in Syria if the PKK becomes a threat to Turkey from Syrian territory.