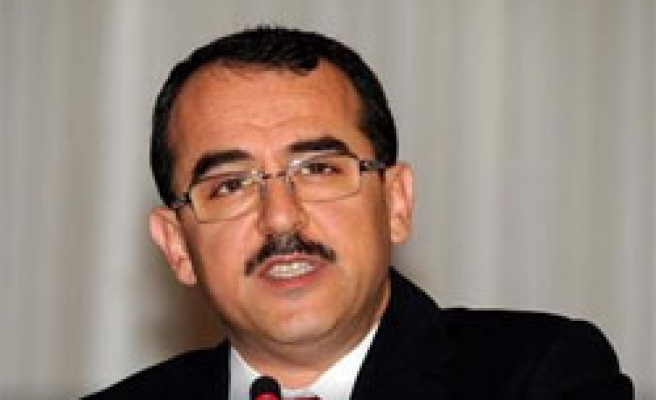 Justice Minister Sadullah Ergin has said he took a stand against a recently exposed plan by the Supreme Board of Judges and Prosecutors (HSYK) to replace judges and prosecutors involved in a number of high-profile criminal cases in Turkey as he believed the replacements suggested actually aimed to change the composition and structure of certain courts.

“The appointment list ran in violation of the principles and decisions made [by the Justice Ministry and the HSYK] beforehand. We [the justice minister and his undersecretary] articulated that we did not believe the planned appointments were right,” the minister stated while talking on a news program televised on the TRT news channel on Friday. The minister was commenting on the recent tension between the Justice Ministry and the HSYK, which stemmed from the board's controversial attempt to change dozens of judges and prosecutors overseeing Turkey's most important criminal cases.

The HSYK sought to change the judges and prosecutors in such cases as the Ergenekon, Balyoz (Sledgehammer), Poyrazkoy, Kafes (Cage) and Temizoz cases. The board prepared an additional list for the replacements and submitted it to the Justice Ministry for approval. According to most observers, the list -- also known as the “pirate list” -- is aimed at facilitating the release of dozens of suspects charged in these cases from prison.

The Justice Ministry is, however, not in favor of replacing these judges and prosecutors, and Ergin stopped deliberations with the HSYK on Wednesday.

“If you ask me where the problem stems from, let me put it this way. We conducted the work on the appointment list, and completed the talks with the HSYK. But when we were about to sign the appointment list the other day, board members presented us with an additional list. The list included extra demands on the ministry. Some analysts now say that such a practice is quite ordinary, as HSYK members have the right to make changes to the appointment list. But the point is the timing. They should have done it during the deliberations. I believe they kept their demands hidden from the ministry until the last minute because their demands are not plausible. They even go against their own principles,” the minister noted during the television program.

According to Ergin, the new list included such moves to influence the course of several ongoing investigations and trials. He also dismissed claims that the HSYK was hoping to “lighten the workload” of certain courts by assigning new judges and prosecutors there.

He also said he quit deliberations with the HSYK upon the board's insistence on the appointment list.

“Now, the ministry [of justice] is working on the HSYK's demands. That's not an easy business. We will re-convene with the board once we complete the work,” he added. The minister also recalled that the talks between the ministry and the HSYK were brought to a standstill due to a similar attempt by the board in 2009.

Ertosun also called for the removal of prosecutors conducting probes into the Kurdish Communities Union (KCK) -- the urban arm of the Kurdistan Workers' Party (PKK) -- and Col. Cemal Temizoz. The Justice Ministry strongly resisted the proposed reassignments, and the judges and prosecutors overseeing the cases remained in their positions.

Ergin was also questioned about the growing complaints from suspects arrested as part of the case against Ergenekon, a clandestine criminal organization accused of working to topple the government. Dozens of Ergenekon suspects are currently behind the bars pending trial. Some complain that they have been imprisoned for more than two years despite not being charged with any crime.

For the minister, such complaints aim to unduly influence the courts which decided to arrest the suspects.

“We have indictments thousands of pages long and many folders of evidence related to the indictments. Turning a blind eye to their existence and urging the suspects' release from prison is an attempt to use some sort of influence on the courts,” he said, and added that the suspects are being tried in accordance with the related articles and provisions of the Code on Criminal Procedure (CMK).

“If there is a problem at hand [with the lengthy prison terms of suspects] then we should work to overcome it by amending laws, but not by working to influence the courts,” Ergin noted.

Ergin was also asked about the accuracy of news reports which alleged that the lawyers for the jailed leader of the militant Kurdistan Workers' Party (PKK), Abdullah Ocalan, could not meet their client due to a mechanical problem with a boat that was to sail to the prison island of İmralı, off the coast of the Sea of Marmara.

Ergin said the reports are completely fabricated, and added that the lawyers' boat is currently undergoing its yearly maintenance and Öcalan's lawyers travel to the prison on a rented boat.