Parliament Speaker Cicek said the commission needs to work more vigorously from now on in order not to crush the hopes of the nation about the new constitution, implying that the commission is being given a last chance to conclude their work. 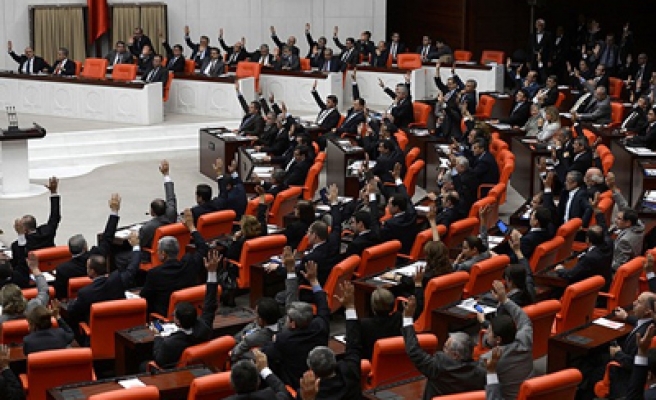 Opposition parties have positively responded to a call from Prime Minister Recep Tayyip Erdoğan, who on Wednesday called on them to join together to pass 48 constitutional articles from Parliament on which four political parties have reached a consensus, yet they said a constitutional package including more articles should be brought to Parliament.

Speaking at a fast-breaking dinner hosted by the Civil Servants' Trade Union (Memur-Sen), Erdoğan said: “Let [the parliamentary Reconciliation Commission] work for five days a week vigorously. There are 48 articles on which there is consensus. Let's increase this to 68 to 78. If you [the commission] cannot do this, let's pass the 48 articles immediately [from Parliament].We can approve 48 articles in a week. Prove how sincere you are.”

Erdoğan's statements came several hours after a meeting he held with Parliament Speaker Cemil Çiçek, who had a tour of party leaders this week as the head of the parliamentary Reconciliation Commission, which is working to draft the new charter.

CHP deputy Atilla Kart, who is a member of the parliamentary Reconciliation Commission, said his party is fine with the passage of the 48 articles from Parliament, but he said there is need for more work to be done particularly on thorny issues that he said will save Turkey from shameful practices.

Peace and Democracy Party (BDP) deputy group chairperson Pervin Buldan also said her party would welcome passage of the 48 articles from Parliament but she said they would not find this a sufficient move.

“Because those 48 articles are about critical issues, they are mostly on technical issues. We think it is more appropriate to work for the addition of articles that promote democratization and bring a package to Parliament that includes more than 70 articles. We don't reject the 48-article package, but we think it will not fulfill expectations,” she said.

Buldan also added that the package needs to be enriched if it is going to be presented as a democratization package for the settlement process that concerns ongoing government-sponsored talks with the Kurdistan Workers' Party (PKK) aimed to resolve Turkey's longstanding conflict.

The Nationalist Movement Party (MHP) also responded to Erdoğan's call in the affirmative as the party's deputy group chairman Mehmet Şandır said: “We want to see Erdoğan's seriousness about the remarks he made at the fast-breaking dinner as if he was giving a sermon. We will make an assessment of the proposal that will come on this issue in our party. But the final decision will be given by the authorized councils of our party.

In his speech on Wednesday, Prime Minister Erdoğan also responded to a call from CHP leader Kemal Kılıçdaroğlu, who asked the government to give up their aspirations to switch to a presidential system, which he claimed to be the reason for the stalled work of the commission.

Çiçek's visits aimed to exchange views with party leaders on how to move forward in the preparation of a brand new constitution, the progress on which has appeared to be stuck over the past couple of months.

Leaders of the all the political parties told the parliament speaker that that they are of the opinion that the parliamentary Constitutional Reconciliation Commission should get on with its task during the summer in order to make further progress.

Cicek said the commission needs to work more vigorously from now on in order not to crush the hopes of the nation about the new constitution.

He also said there will be no further tour of visits to party leaders seeking consensus on the new constitution, implying that the commission is being given a last chance to conclude their work.

Turkey's current constitution was drafted under martial law after the Sept. 12, 1980 military coup and has long been criticized for failing to respond to today's needs for broader rights and freedoms.

In the meantime, the parliamentary Reconciliation Commission convened at 1:30 p.m. on Thursday under the leadership of Çiçek. The commission met in order to make an assessment of Erdoğan's call for the approval of 48 articles in Parliament and for the results of Çiçek's party leaders' tour.