Chairman of the ruling AK Party and PM Erdogan said certain circles wanted Turkey to turn its face towards the West and its back on the East. 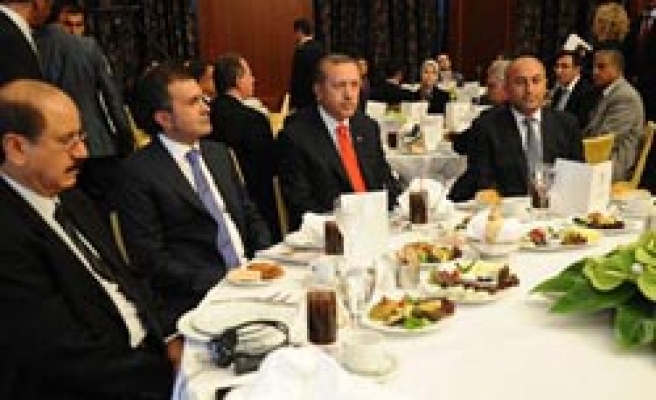 Chairman of the ruling Justice and Development (AK) Party and Prime Minister Recep Tayyip Erdogan said Thursday certain circles wanted Turkey to turn its face towards the West and its back on the East.

Speaking to guests at the Fourth Traditional Fast-Breaking Meal at AK Party HQ in Ankara, Prime Minister Erdogan said that no one had the right to request such a move from Turkey.

"As the Turkish government, our face is directed at all sides in the world," Erdogan stressed.

Touching on Turkey's relations with the European Union (EU), Erdogan said that artificial obstacles should not be placed on Turkey's path on the way to EU membership.

The issue of Cyprus has been taken away from its real character and has been turned into a problem between Turkey and the EU, Erdogan underlined.

We expect a permanent and fair solution in Cyprus by the end of 2010, Erdogan said.

Thanking all the guests, including ambassadors serving in Ankara, for their attendance in the Fast-Breaking Meal, Erdogan said that the current Ramadan will contribute to peace, friendship and solidarity not only in the Islamic world but the whole world.