'This victory is not ours [AK Party], but that of our nation and our citizens,' Turkish PM and AK Party Chairman Davutoglu says 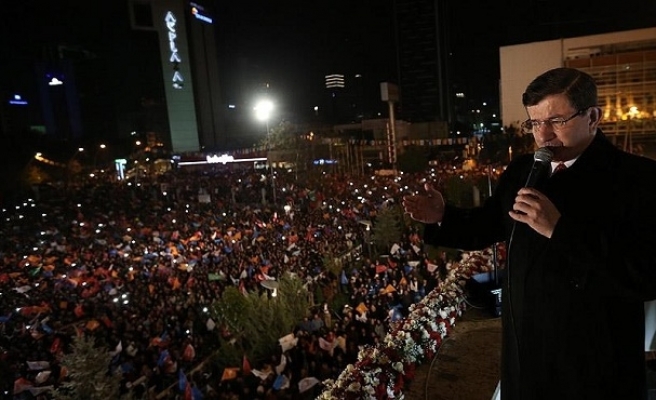 "This victory is not ours [AK Party], but that of our nation and our citizens," Davutoglu said in an address in his hometown in Konya hours after preliminary results put the AK Party ahead of all other parties.

The Turkish PM spoke in Konya just before a victory speech in the capital, Ankara.

He addressed AK Party voters saying: “Do not be provoked.”

“Today, you will greet your neighbors and you will embrace your brothers more than ever. You will not be provoked”, he added.

Davutoglu also addressed other parties’ supporters, saying they should not feel that they lost the election: "There is no loser today. The only winner is our nation, our republic, our democracy."

276 seats are needed for a single party government.

The Nationalist Movement Party (MHP) got 11.97 percent votes (41 seats), while the Peoples' Democratic Party (HDP) secured 10.61 percent (59 seats), which is just above the election threshold requirement of 10 percent.

The preliminary voter turnout across Turkey stood at 86.76 percent. Preliminary results were released after Turkey's Supreme Election Board lifted a broadcast ban at 7 p.m. local time.

More than 54 million Turks were eligible to vote in a poll to elect 550 deputies to the Grand National Assembly.

Speaking to a massive crowd in his hometown of Konya, Ahmet Davutoglu said:

“I would like to praise my Lord right before you. I owe you and my nation a thank you.

We have never turned our backs on you and never will. Today is a day of victory for our people. I would like to thank all my brothers and sisters for their contributions, may God be pleased with you.

Today my only prayer is: may God not shame us.”

With a remarkable turn around for the AK Party, Davutoglu moved onto the capital Ankara and delivering a third victory speech said

"You, can see the games played on our country and you have broken these games. You have not only buried the former parties in the polls but you have also buried the former Turkish mentality, the chaos, violence , terrorism, instability as well, "he said.