Erdogan praised the sport complexes built for the organization, and expressed hopes that the games will serve as a symbol of peace and freedom. 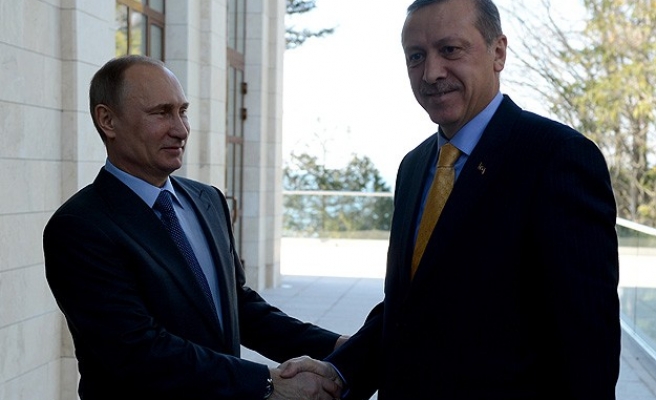 The leaders met at the government offices in the Black Sea city where they both will attend the opening ceremony of the long-awaited winter olympics.

Erdogan praised the sport complexes built for the organization, and expressed hopes that the games will serve as a symbol of peace and freedom.

"Here I saw the succesful works done by the Turkish construction companies," Erdogan said, adding that the Turkish companies can play a similar role for the FIFA 2018 World Cup, which will also be held in Russia.

Erdogan said the trade volume between Turkey and Russia is in a good condition and stressed the importance of energy cooperations.

The Russian president also commented on the two countries' economic relations, saying the construction work by the Turkish companies in Russia amount to $50billion since the 1990s.

"All of our experts are satisfied with Turkish construction companies. They did their jobs in a professional and devoted way," Putin said.

After giving statements to the press, both leaders held a closed-door meeting which was also attended by Turkish Foreign Minister Ahmet Davutoglu and Energy Minister Taner Yildiz.

Putin has no love lost for Turkey and their part in toppling the government of Egypt. The worst is the NATO /CIA Gladio B control of Turkey and training of Jihadists that are slipping into Syria.Putin will protect Syria and knows about Turkey's involvement with the toppling of 5 governments. Erdogan is said to be "exiting" by the end of March 2014, his feud with CIA backed Gulen is not going to end pretty. Putin knows the CIA Gladio B was put in place partly to destabilize Russia.