Turkey's civilian leaders prepared to use an unprecedented opportunity this week to choose generals they trust after the top commanders of all four military branches resigned. 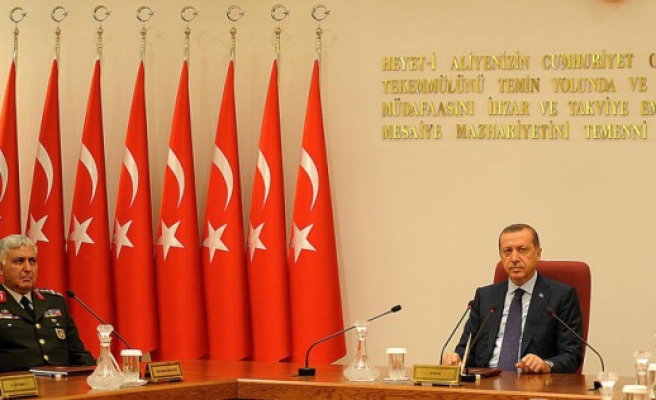 Turkey's civilian leaders prepared to use an unprecedented opportunity this week to choose generals they trust after the top commanders of all four military branches resigned in protest over the detention of comrades facing coup conspiracy charges.

Prime Minister Tayyip Erdogan convened the Supreme Military Council (YAS) as scheduled on Monday despite the presence of only nine of the 14 generals who would normally attend the twice-yearly meeting to decide key promotions in NATO's second largest armed force. The meeting will run four days.

On Friday when Chief of General Staff Isik Kosaner stepped down, along with the army, navy and air force commanders, to take early retirement.

The fifth general missing from Monday's meeting was one of some 250 officers now jailed on charges linked to various alleged anti-government plots dating back to 2003.

The resignations will enable Erdogan to consolidate control over a once-omnipotent military that has staged a series of coups since 1960 but whose power has been curbed by European Union-backed reforms since it pushed an Islamist-led government out of power in 1997.

At the heart of the matter is the alleged "Sledgehammer" plot, based on events at a 2003 military seminar. Officers say evidence against them has been fabricated and that allegations of a coup plot arose from a mere war games exercise.

Chairing the AS meeting, Erdogan sat alone at the head of the table where normally he would sit beside the chief of staff. Defence Minister Ismet Yilmaz also attended.

Erdogan has moved quickly to designate former gendarmerie chief General Necdet Ozel as acting chief of staff, who has been portrayed positively as a constitutionalist in pro-government media. Ozel is not expected to be confirmed as the overall commander until the key promotions are announced on Thursday.

Erdogan later joined the generals in a traditional visit to the mausoleum of soldier-statesman Mustafa Kemal Ataturk, founder of modern Turkey, high on a hill above the capital.

After laying a wreath at Ataturk's tomb, Erdogan wrote in the mausoleum visitors' book: "... Our armed forces are making a major advance in their defence duties and through improving their vision."

Erdogan's regular address to the nation on Saturday focused on plans for a new constitution in the EU-candidate country, which is touted as a democratic model for a region cast in turmoil.

But the generals' protest over what they say is the unjust way that the Sledgehammer case is being prosecuted has clouded the start of Erdogan's third term in office.

Timothy Ash, an analyst at Royal Bank of Scotland, who was visiting Turkey over the past week, noted that initial fears of a broader clash developing between the military and the government have receded.

"The consensus over the weekend is that the resignations mark the final end of the military's dominant position in Turkish society and finally show civilian control over the military has been established," Ash wrote in a note on Monday.

Just how much control Erdogan wants to exert at this stage should be clear once the promotions are known. The government opposes some leading candidates while others are on trial accused of trying to overthrow the government.

Among those at the YAS was Aegean Army commander General Nusret Tasdeler, whose attendance had been uncertain after prosecutors ordered his arrest last week along with 21 others over claims that the military set up anti-government websites.

This latest case was seen as one of the triggers behind the resignations of Kosaner and the other generals.

"The most keenly awaited issue is who will be appointed to head the land forces command," said Milliyet columnist Fikret Bila, who has close links to the military.

Potential candidate General Saldiray Berk is likely to be ruled out as he faces trial related to "Ergenekon", an alleged secret network intent on undermining the AK party.

The commander of Turkey's military academies, General Bilgin Balanli, previously in line to take over the air force, is in jail. He is among 200 officers charged with involvement over the alleged "Sledgehammer" coup plot.