“Immediately in the aftermath of the military coup, the [Gulf] countries imposing the sanction and turning a deaf ear to the aid demands of Morsi started to pour billions of aid to the coup-based government,” Erdogan said. 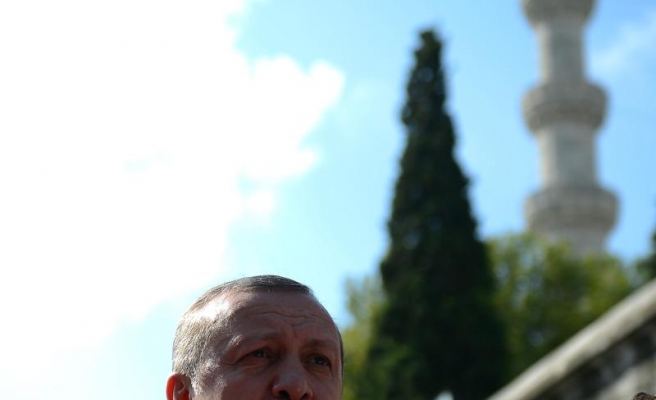 As he spoke to the press, Erdogan stated that he hoped for justice to be served regarding the Ergenekon coup plot trial, the verdicts of which have recently been announced as many life and prison sentences were ruled for over 200 people.

He stressed that the verdict was not the final one as the case will be rediscussed at the Turkish Supreme Court of Appeals.

Erdogan slammed the statements of the Turkish opposition parties on the Ergenekon case and the announced verdicts, describing them as a crime against law and an effort to intervene in the judicial process. He especially criticized the claims of the main opposition leader which express that he did not recognize the jugdes and prosecutors.

"The most significant prosecutor and judge is the nation itself, there is no other and superior body than that as the last word is spoken by the nation," he said.

The Turkish Premier touched upon the democratization package discussed in the Turkish Parliament, saying "I will have the chance during the Eid al-Fitr to review the efforts ever made and after the Eid, we will finalize the package with our colleagues. Parliament may resume efforts after the summer recess, at an earlier time than planned as we will announce the package soon."

Concerning his phone talk with US President Barack Obama, Erdogan stated that they both expressed uneasiness that marginal groups strive and compete to seize up places for themselves as well as the clashes between PYD and Al Qaeda on the Syrian-Turkish border leaving Turkish citizens dead.

Rebuffing the claims that Egypt's first democratically elected President Mohamed Morsi did not embrace all the Egyptian people, Turkish PM noted that Morsi was overthrown by the military coup and replaced by a coup government.

"While an economic sanction was imposed on Morsi's government, no countries other than Turkey and Qatar backed up Egypt. Immediately in the aftermath of the military coup, the countries imposing the sanction and turning a deaf ear to the aid demands of Morsi started to pour billions of aid to the coup-based government. The Western countries still fail to call the military coup as a 'coup' but only an 'intervention'," added Erdogan.

Erdogan also expressed his hope over the continuing resistance by the Egyptian people in favour of democracy, condemning the suspension of the Egyptian constitution, a constitution approved by 65 per cent of the votes in the Egyptian Parliament.

"We will never give up on supporting and siding with our Egyptian brothers and sisters," he added, highlighting that the West failed at the test of sincerity over the recent incidents in Egypt.

Every time I read something about this guy (Erdogan), I admire his guts and the fact that he tells the God's honest truth no matter what.