Turkish Prime Minister Tayyip Erdogan said he is ready to amend an army law criticised to pay the way for coups. 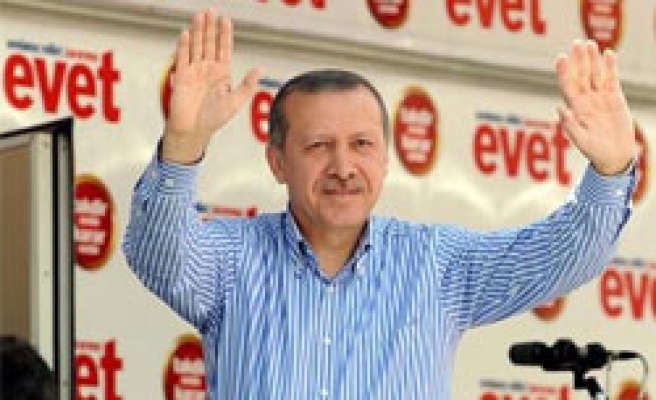 Turkish Prime Minister Tayyip Erdogan said on Saturday he is ready to amend an army law criticised to pay the way for coups.

The remarks come after Turkish president expresssed his backing on an amendment to end coup excuses.

The Article 35 of TSK's Internal Service Law includes a provision saying, "TSK's duty is to protect the Turkish homeland and the Republic".

Turkey's main secularist opposition party CHP's chairman Kemal Kilicdaroglu recently proposed that the article should annulled as it was shown as a pretext for the military intervention of September 12, 1980.

Addressing a rally in the southeastern town of Bingol, Erdogan proposed setting up a commission to consider abolishing the law, even though it is not part of his referendum package.

"If necessary we can take it on to the agenda at the start of the new legislative year," he said. "We can make a new revision of Article 35."

Erdogan made the remarks as he started campaigning ahead of the Sept. 12 referendum on reforms.

Addressing thousands of supporters in Bingol, Erdogan said he was committed to bringing democracy through reform. Many waved banners emblazoned with the word 'Yes' and chanted "Bingol is proud of you".

The reforms will change the make-up of the Constitutional Court and High Board of Judges and Prosecutors and the way their members are elected.

But, Kilicdaroglu, said the AK Party's main aim was to appoint judges sympathetic to the government.

"If you give a 'No' vote in the referendum, they will not have anywhere to hide," Kilicdaroglu said as he campaigned in the eastern province of Malatya.

The referendum is seen as a test of Erdogan's support ahead of an election due by July 2011.