Erdoğan has ruled out any prospects of tensions between the government and the military at a Supreme Military Council meeting slated for Monday. 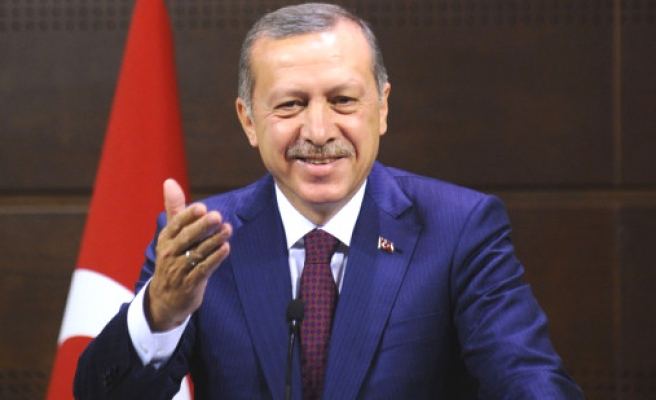 Prime Minister Recep Tayyip Erdoğan has ruled out any prospects of tensions between the government and the military at a Supreme Military Council (YAŞ) meeting slated for Monday, saying that the decisions to be made at the meeting will be in accordance with the law.

"I do not believe any tension will arise [at YAŞ]. In this country, the judiciary functions with its normal mechanisms and whatever the law requires will be done. The law concerning promotions and appointments are clear," Erdoğan said, speaking to reporters while returning from an official visit to Baku late Wednesday.

YAŞ meets each August to discuss promotions and dismissals within the armed forces. The fact that there are some commanders and military officers who are suspects in ongoing coup cases has led some to speculate that there could be some disagreement between the military and the government about the promotion of these individuals. The ruling Justice and Development Party (AK Party) had earlier signaled that it would not give the green light for the promotions of these individuals at the YAŞ meeting.

Last August, Turkey witnessed tensions between the military and the AK Party government when the General Staff attempted to promote a number of generals and admirals standing trial in criminal cases. The government resisted the move and the individuals were eventually not promoted.

Currently there are 195 suspects, all retired and active duty members of the armed forces, in the ongoing case against Sledgehammer, a suspected coup plan devised at a military gathering in 2003, which allegedly sought to undermine the government in order to lay the groundwork for a military takeover. More senior military personnel have recently been arrested and jailed on charges of links to the subversive coup plan. The government plans to prevent the promotion of 41 Sledgehammer suspects who are active TSK members.

The prime minister also commented on Turkey's counterterrorism efforts in the wake of recent deadly outlawed Kurdistan Workers' Party (PKK) attacks and said new strategies will be adopted for a better and more effective fight against terrorism.

Turkey has recently been shaken by PKK attacks in which almost 20 soldiers have been killed.

When asked whether Turkey intends to carry out a cross-border operation into northern Iraq, where the PKK bases are located, Erdoğan replied: "Let's leave this to those who need to do this. [The PKK] will no longer find good will against its bad will. Very different strategies will be implemented [in the fight against terrorism] no matter what the cost is. We are entering a new phase."

Elaborating on new strategies that will be adopted, Erdoğan said the gendarmerie and the police will be integrated in the fight against terrorism, land forces will take action when requested by governors and a professional army will be established.

Erdoğan also said security forces will never give up carrying out operations and increasing their operational abilities. In this regard, he called the PKK's demand for security forces to lay down their weapons as nonsense, saying that the party that needs to lay down its weapons is the PKK.

"If they give up this business [of attacking security forces], operations will nearly end," said the prime minister.

A racist attack carried out by a Norwegian man in Oslo who killed 76 people last week, was also among the issues Erdoğan touched upon. He said there are lessons for the Christian world to learn from this attack and think about how they have acted unjustly in their treatment of Muslims in the wake of attacks carried out by other people who call themselves Muslims.

"There are lessons the Christian world should take from this incident. First, it was anti-Semitism, then Islamophobia and now they are talking about Islamic terrorism. But nobody is calling the [Oslo incident] Christian terrorism [given the attacker is a Christian]. They are avoiding making such a statement. Have you ever heard of such as thing as Christian terrorism? But the attacker was a good Christian and he cited the Knights Templar. The world's Christians should check themselves and ask 'Why have we attacked Muslims this much?' Despite the person who carried the terrorist attack having nothing to do with Islam, they [the West] still initially labeled it as Islamic terrorism. This is what we always say, we are against terrorism no matter who is involved," explained the prime minister.

When asked about ongoing debates in Israel for an apology to Turkey over the Mavi Marmara incident last year, Erdoğan reiterated that it is necessary for Israel to apologize to Turkey, pay compensation to the victims of the Mavi Marmara and eliminate the blockade of Gaza to achieve a normalization of relations with Turkey.

Turkish and Israeli relations were severely strained after Israeli naval commandos attacked the Mavi Marmara, an aid ship, on May 31 last year, killing nine civilians, including eight Turkish nationals. Turkey has sued Israel in international platforms and courts and is demanding an official apology and compensation for the families of the victims. Israel has rejected the request and claims its soldiers acted in self-defense; however, the country has recently softened its stance and begun to debate the apology issue.

"We need to see a statement of apology. We do not expect expressions like, 'We are sorry.' We want an official apology, compensation [for the victim families] and lifting of Gaza blockade [for reconciliation with Israel]," said Erdoğan.

The prime minister also touched on a match-fixing investigation involving some of the country's top football clubs, which was launched earlier this month. He said he sees the probe as a "process of cleansing."

A Turkish court has already jailed 31 people pending trial, including Fenerbahçe Chairman Aziz Yıldırım and the coach and deputy chairman of Beşiktaş on charges of match fixing.

Erdoğan also praised the Turkish Football Federation (TFF) which delayed the start of the Turkish football league to September in order to wait for evidence to emerge in the match-fixing probe, saying that the TFF is acting very meticulously in this process.