PM Erdogan warned voters ahead of March 30 local elections not to be swayed by an opposition bent on provocation, clashes and intrigue 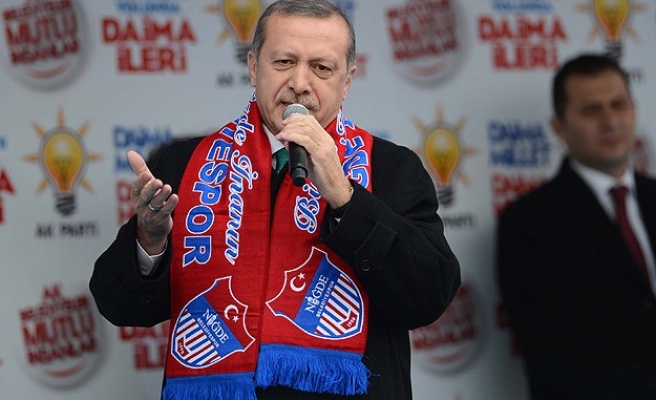 Turkish PM Erdogan on Monday warned voters ahead of March 30 local elections not to be swayed by an opposition bent on provocation, clashes and intrigue.

Speaking at an election campaign rally in the Cental Anatolian province of Nigde, Erdogan repeated the three main focuses of his campaign; people-centered policies, promotion of democracy and urban development, pared down to the slogan: people, democracy, city.

Erdogan said that more than 7000 people, including political figures, the head of the military, the president, journalists, artists and businesspeople had been illegally wiretapped and blackmailed.

Erdogan renewed his call on US based preacher Fethullah Gulen to return to Turkey, rather than focussing on Turkish politics from America.

Denying the corruption allegations and talking about the development that Turkey underwent during Justice and Development (AK) Party rule, "You will vote for the New Turkey," said Erdogan.

Frequently making the Rabia sign Erdogan added, "thanks to the the AK Party, living standards of our people were improved ."