While Turkish politicians are still exchanging words on a solution to Turkey's headscarf ban during their referendum rallies, the issue has reared its ugly head once again. 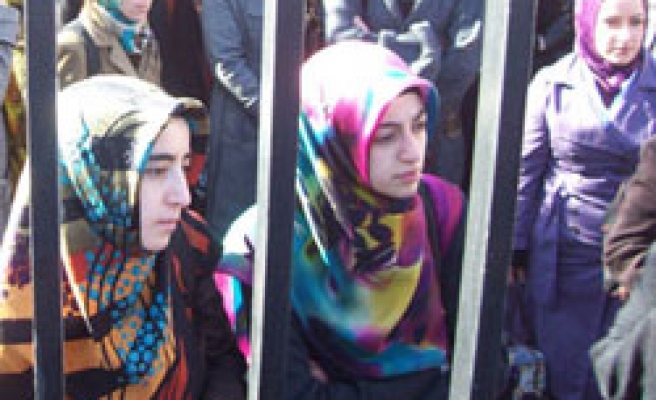 While Turkish politicians are still exchanging words on a solution to Turkey's headscarf ban during their referendum rallies, the issue has reared its ugly head once again as the registration period of a number of universities has started.

Thousands of students flocked to university campuses to complete their registration procedures this week by submitting documents required for registration. However, in what has unfortunately become a tradition, students wearing headscarves had to take off their head coverings when entering the buildings where the documents necessary for registration were to be submitted.

Çukurova University was one of the universities where the ban was strictly imposed. “I find such a ban nonsense in a democratic country. It was very difficult for me to take my headscarf off while entering the campus. I hung around the place where I was supposed to take off my headscarf for half an hour before taking off my scarf,” said M. B., a headscarf-wearing student who was forced to take her covering off on Monday.

Another student who gained admission to faculty of theology, H.Y., was not allowed to enter the campus with her headscarf either and she could not submit her registration. “This ban has nothing to do either with justice or law. I am wearing the headscarf of my own will. I am just trying to practice my religion,” she told reporters as tears shone in her eyes.

The ban on the use of headscarves has remained one of the most serious problems in Turkey. Headscarves were banned on university campuses in the late 1990s through a Constitutional Court ruling on the grounds that allowing them to be worn would violate the nation's secular principles because the headscarf was seen as a political and religious symbol. Political parties have thus far failed to find a solution that satisfies everyone.

“This is an act of injustice which has been continuing for decades and which does not comply with either human rights or freedom of education and democracy,” Hüseyin Korkut, the head of the Association of İmam-Hatip Graduates (ÖNDER), told Cihan news agency.

The ban is applied in almost all universities during registrations, but some have even broadened the scope of the ban, which in fact lacks a legal basis. The Malatya-based İnönü University prepared a booklet explaining the registration procedures to students, including an extra criterion for the photographs to be submitted. The university said a student's neck should be also uncovered as well as her head, something which has discouraged the already demoralized headscarf-wearing students more.

“The discrimination against the headscarf-clad women during university registrations is unacceptable at a time when the UN Convention on the Elimination of All Forms of Discrimination against Women [CEDAW] said that the ban is a form of discrimination against covered women, when even the staunchly secular Republican People's Party [CHP] is pledging to lift the ban and when Turkey is struggling to be more democratic with a constitutional reform package to be voted on in a referendum on Sept. 12,” lawyer and human rights activist Fatma Benli, also a headscarf-wearing woman, told the agency.

CEDAW, which devoted its final observations with regards to a two-week meeting in August on Turkey to the controversial ban in the country on the use of Islamic head coverings in the public sphere, said, “Legal action should be taken against those who work to apply the headscarf ban, and the solution to the problem should not be deferred to a later date.”

Turkey indeed attempted to lift the ban previously. In early February 2008, the ruling Justice and Development Party (AK Party) with the support of the opposition Nationalist Movement Party (MHP) passed a constitutional amendment that would have lifted the ban on wearing the headscarf at university campuses. However, upon an appeal by the staunchly secular CHP and its ally, the Democratic Left Party (DSP), the Constitutional Court ruled that Parliament had "violated" the constitutionally enshrined principle of secularism when it passed amendments to remove the scarf ban and annulled the amendment.

"No polemics, but action"

Universities opened their doors for the new academic year this year amidst an ongoing debate among political party leaders over a solution to the headscarf ban. The debate was ignited by CHP leader Kemal Kılıçdaroğlu last week during a rally when he pledged to solve the issue if his party came to power. “I promise that the CHP will allow the wearing of the headscarf. The prime minister will see. He could not manage it, but we will,” the CHP leader vowed.

“Our stance on the headscarf issue is clear. I do not think that the MHP has changed its stance either. If the CHP is also in favor of a solution, this would make us happy and there is no need to wait more. We can solve this after Sept. 12,” Prime Minister Recep Tayyip Erdoğan said, responding to Kılıçdaroğlu, on Sunday.

Headscarf-wearing women continue to be victimized by the ban while the leaders are engaged in polemics over the issue, Association of Human Rights and Solidarity for Oppressed Peoples (MAZLUM-DER) head Faruk Ünsal said.

"They should take action to end the problem instead of just exchanging words. Recalling that Kılıçdaroğlu's CHP was the party which took the 2008 constitutional amendment to the Constitutional Court for annulment, he said the party should correct this error as the CHP has the biggest share of the blame in the ban," he added.

Observers say that both the fact that the issue is being discussed among politicians more and the upcoming referendum can serve as steps toward a solution.

ÖNDER's Korkut says he thinks that the government intends to settle the issue and, if approved, the constitutional changes can pave the way for the abolishment of the ban. “The judicial tutelage over politics blocked the solution in 2008. Now the reform package aims to end this tutelage, which is why we are saying ‘yes' to the changes. So, a solution can be possible after the referendum since politicians' excuses will be eradicated,” he told the agency.

On Sept. 12, the nation will vote on a number of constitutional changes approved by Parliament in May. Among other things, the reform package includes changes to the structure of the Constitutional Court and the Supreme Board of Judges and Prosecutors (HSYK).

MAZLUM-DER's Ünsal recalls that parliamentary elections are also drawing near, which may put pressure on politicians to address the headscarf issue. “Voter pressure can bring about positive results,” he says.

We, the majority of the Muslim people of Turkey are sick and tired of this ban. Hope it will eventually be lifted following a majority YES vote in the referandum. NOT THE LAW OF THE POWERFUL BUT THE POWER OF LAW...INSHALLAH.