Gul stressed problem in Syria was not only about chemical weapons and a comprehensive political strategy must be found to put an end to Syria crisis. 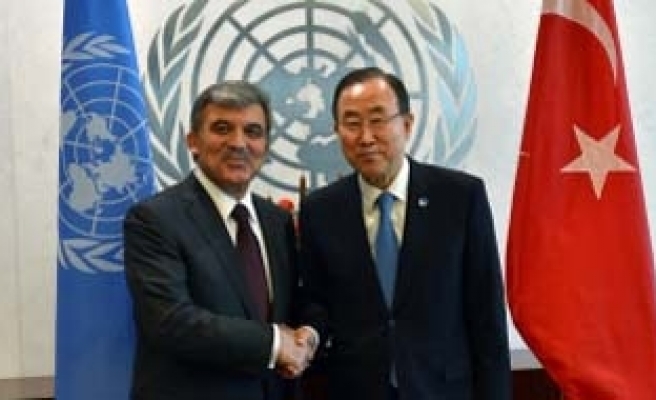 Gul said the elimination of the Syrian chemical weapons program was a positive step. He stressed that the problem in Syria was not only about chemical weapons and added a comprehensive political strategy must be found to put an end to Syria crisis.

"It is time for the UN to take concrete steps for its dignity and reliability," he said.

Gul and Ban also discussed the Cyprus dispute between Turkish Republic of Northern Cyprus and the Greek Cypriot administration, which has been going on since 1974.

Turkey's approach to solution of the dispute was clear, Gul said, adding, "If the Greek Cypriot administration responds to the steps taken by Turkey, there will be a quicker solution".

Meanwhile Huzai said Iraq had the political stability to improve relations and cooperation with Turkey.

Gul and his spouse Hayrunnisa Gul attended a reception hosted by US President Barack Obama. Gul called on US business people to invest in Turkey at the reception.

The Turkish president reminded that the trade volume between Turkey and the US surpassed $20 billion, "The US is our major ally. However it is not our greatest trade partner," he said.