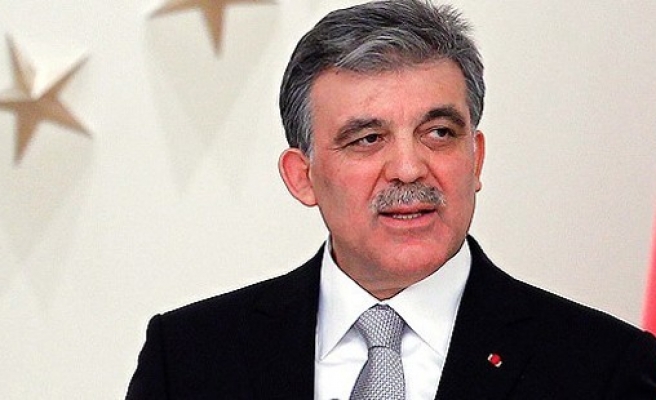 Turkish President Abdullah Gul appealed to Egypt's army-installed government on Friday to return the country swiftly to democratic rule and allow all parties to take part in the political process.

In an article published in the Financial Times, Gul urged the Egyptian authorities to release the detained former president, Islamist Mohamed Morsi, who was overthrown by the army last month, but stopped short of calling for his return to office.

"The Egyptian people have almost been split into two camps, each of which is rallying dangerously against the other. This situation is worrying and unsustainable," he wrote.

Turkey is an important player in Middle East diplomacy and Gul was adding his voice to number of international calls along similar lines in the wake of Morsi's overthrow.

Egypt's interim government has promised its own transition plan, leading to new elections in nine months time. But what role Morsi's Muslim Brotherhood would have in this, if any at all, is unclear. Most of its leaders have been jailed.

More than 300 people have been killed in political violence since Mursi's overthrow and the security forces have threatened to dismantle two protest camps where his supporters are making a stand, raising concern that more lives will be lost.

Gul said Turkey had supported the 2011 uprising against strongman Hosni Mubarak and the election that brought Mursi to power.

"Unfortunately, the historic step towards democracy failed in less than two years. The coup that ousted Mohamed Mursi, Egypt's first democratically elected president, was a clear derailment of the country's progress," he wrote.

His description of Mursi's overthrow as a coup is likely to rile the Egyptian military, who say they were enforcing the will of the people as manifested in huge demonstrations against his rule, and do not seek to exercise power.

Gul said the problems should have been resolved through democratic means.

"At moments of peril, it is more important than ever to stick closely to the democratic path," he said.

"A quick return to democracy - which was the aim of the revolution - through an inclusive transition process, is of utmost importance."

All political groups should be allowed to take part in elections. The release of Morsi and his fellow politicians would contribute to reconciliation and stability, he added.