Turkey's Foreign Ministry said the ongoing conflict in Syria posed serious risks to safety and security of tomb and soldiers. 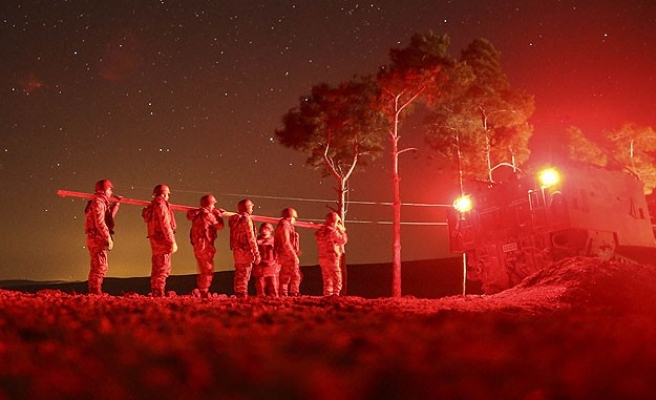 A column of around 100 Turkish military vehicles including 39 tanks entered Syriaovernight in an operation to evacuate several dozen Turkish soldiers guarding the tomb of Suleyman Shah, Prime Minister Ahmet Davutoglu said on Sunday.

The operation was successful, with the 38 soldiers safely back in Turkey, Davutoglu told a news conference inAnkara. He said that Turkey had not sought permission or assistance for the mission but had informed allies in the international coalition against Islamic State after the operation began.

Davutoglu earlier said the remains of Suleyman Shah, grandfather of the founder of the Ottoman Empire, would be moved to a different area of Syria which has been brought under Turkish military control.

Turkey's only exclave has been temporarily relocated to a new site within Syria due to the ongoing conflict in the country, Turkey's Foreign Ministry announced Sunday morning.

Releasing a written statement, the ministry said "The ongoing conflict and state of chaos in Syria posed serious risks to the safety and security of the tomb located in Karakozak Village in Munbic, Syria, 37 km away from the borders of Turkey, and of the Turkish Armed Forces personnel valiantly guarding it."

"Based on extensive assessments, the Tomb of Süleyman Şah and Memorial Outpost, together with the sarcophagus itself, have been temporarily moved to a new site within Syria, corresponding to the acreage of the previous one, in the north of Suriye Eşmesi village close to the Turkish borders," the statement added.

Turkish forces and tanks entered Syria on Saturday night to conduct the "Shah Firat" operation, to remove the tomb of Suleyman Shah, Davutoglu and the Turkish armed forces confirmed.

The operation was completed successfully and the special forces unit that protects the exclave has returned to the homeland, Davutoglu said on Sunday morning.

One soldier died in an accident at the onset of the operation, but there were no skirmishes or other interruptions, according to Davutoglu.

The ministry also explained that the temporary relocation of the tomb, "conducted on the basis of security assessments," does not constitute any change on the status of the tomb and its annexation stated by the agreements.

Protected by Turkish troops, the Suleyman Shah Tomb and the surrounding area, Turkey's only exclave, are located in Aleppo's Manbij district, 37 km away from the Turkish border.

Shah has an important place in Turkish history since he was the grandfather of the founder of the Ottoman Empire.

The tomb and its annex, since their construction originally on the hills of Caber Castle, have gone through several processes of demolition, relocation, and reconstruction. The tomb was moved to its current location in 1975 as a consequence of a dam construction.