The government has decided that the Defense Ministry and the general staff will carry out reform studies from a single center. 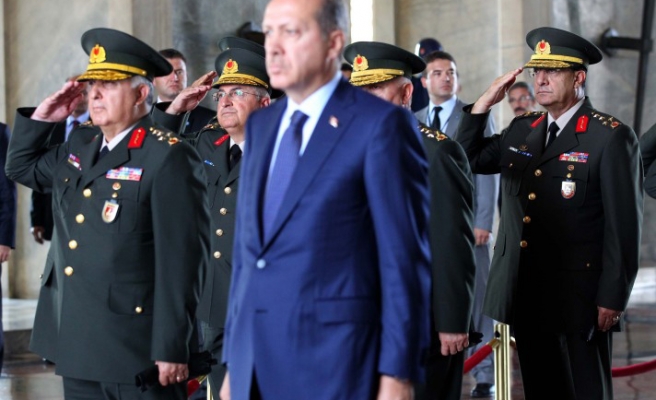 The council will meet again at the General Staff headquarters in Ankara on Thursday for its fourth-day deliberations.

The regular YAS meeting will end on August 4. Council's decisions will be made public after presented to President Abdullah Gul.

The Council will advance several colonels, admirals and generals to a higher rank, appoint new generals and admirals to several military posts, and discuss undisciplined or unethical behaviors and retirement of officers during the meeting.

Turkey's military has ousted several democratically elected governments and has ongoing disputes with the AK Party government that intervene in the administration of the country, which is unacceptable in a democratic nation.

The latest crisis between the government and the military began last week when four top commanders, including the chief of general staff, requested early retirement in the wake of the government's determination not to promote generals at the YAS meeting who are suspects in a coup case. The YAS convened for a four-day meeting that began on Monday. A similar crisis concerning the promotion of coup suspects emerged at the last YAŞ meeting, which convenes yearly to discuss promotions and dismissals within the armed forces.

According to Cihan news agency, the government plans to restructure the TSK in order to avoid similar tensions in the future and to make it more effective in the war against PKK. The military's shortcomings and negligence regarding deadly attacks made by the Kurdistan Workers' Party (PKK) frequently make their way to the media, generating calls to reform the TSK. In the latest PKK attack, 13 soldiers were killed in Diyarbakir's Silvan district. The Turkish general staff came under harsh fire for failing to protect the soldiers and for a poor response time in reaching the site of the attack.

The government has decided that the Defense Ministry and the general staff will carry out reform studies from a single center. The Defense Ministry has been working on reforms to shorten the duration of the obligatory military service and to instate a single type of service which would entail nine or 12 months in the military and would make the duration of service the same for all conscripts. Today, the duration of military service required is either six or 15 months, according to the conscript's level of education. A team of experts established at the prime ministry have begun examining a report prepared by the former chief of general staff, Gen. Hilmi Ozkok , in 2005.

The report, titled "The 2010 Vision for the TSK" calls for the gradual modernization of the TSK.

In the wake of the latest resignation crisis, the government has decided to include amendments to harmonize Turkish legislation with the EU -- which Turkey aspires to join -- in its reform package. In line with this strategy, it aims to subordinate the general staff to the Defense Ministry.

According to Article 117 of the Turkish Constitution, the chief of General Staff currently answers to the prime minister; however, the General Staff is not tied to the Prime Ministry or his office, and is autonomous in the exercise of its duties and powers. The government would need to make changes to the Constitution to tie the general staff to the Defense Ministry.

Although the abolishment of the Aegean Army Command -- which was established in response to threats from Greece -- has been debated for a while, no steps have yet been taken to this effect due to nationalist reactions. The 1st Army Command in Istanbul and the 2nd Army Command in Malatya will be renamed the West and East Armies. The air force unit of the land forces command will be made stronger and its role in the fight against PKK more important.

The heads of land, air and naval forces will be given the post of the deputy chief of General Staff. The logistics, intelligence, planning and principles and education units in each of these commands will be abolished and all work previously so divided will be carried out at the general staff headquarters. The position of general staff planning and principles president will be split in two and a new presidency, which will be responsible for financial affairs, will be established at the general staff. In this way, financial administration will be carried out from one center.

The en masse resignations prior to the YAS meeting have prompted the government to make changes to the TSKs promotion system. This system, which currently calls for a certain duration of service at each rank before promotion, will be abandoned and replaced by a system that takes success and competence into account. So, a military member may never become a general even after serving 28 years.

Command of the gendarmerie will be tied to the Interior Ministry. In line with the EU harmonization efforts, military expenses will be open to auditing by the Court of Accounts. In an effort to reform the military judiciary, the Military High Administrative Court (AYİM) and the Military Supreme Court of Appeals will be abolished. Radical amendments will be made to the Military Penal Code and the definitions of crimes relevant to an officer's post will be changed.

The Personnel Law of the TSK will be amended and the defense minister's authority to suspend military members who are tried in court will be made clear.