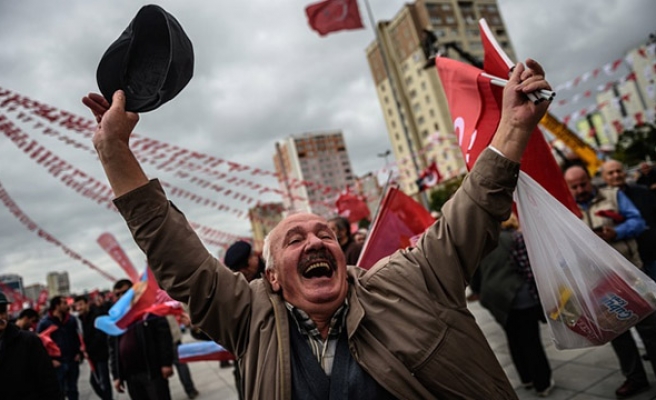 In remarks made to reporters in Istanbul Monday, Erdogan also expressed his gratitude. “National will favored stability on Nov. 1…I want to especially thank my nation,” the president said.

According to the preliminary results based on 99.58 percent of votes counted, the Justice and Development (AK) Party secured 49.41 percent of the votes -- a higher proportion than any of the predictions by opinion polls -- winning 316 seats at the 550-seat Grand National Assembly.

Erdogan also called for unity in the country following AK Party’s victory. “Everyone should respect the results,” the president said.

The final election figures will be announced on Nov. 17 by the Supreme Election Committee (YSK), he added.

In an earlier statement following the election result, Erdogan said that AK Party’s victory was a response to PKK terrorism.

“The most important message was given, undoubtedly, to the separatist terrorist organization and the structures under its guidance,” Erdogan said after the party he co-founded won enough seats to form a government in the rerun of June’s election.

“Our nation on Nov. 1 communicated in a clear manner that pressure, threats and bloodshed cannot co-exist with democracy, national will, law and development,” he added.

He said the result showed the electorate supported the “unity, solidarity and integrity of our country”.

Referring to the two opposition parties that could not agree to enter into a coalition with the AK Party following June’s vote -- the Republican People's Party (CHP) and the Nationalist Movement Party (MHP) -- Erdogan said the election showed their “long-held uncompromising and vindictive attitudes” during coalition talks “were not approved by our nation”.

The CHP registered a slight increase in its vote while the MHP saw its number of deputies nearly halved.

“Our nation clearly stated that it prefers the politics of service, project and vision, not one of exploitation and polemics,” he said.

“The election results show that our nation chose to support the environment of stability and confidence which was at risk on June 7 -- re-authorizing the AK Party, who had been in power single-handedly for the past 13 years, for another four-year term,” he added.