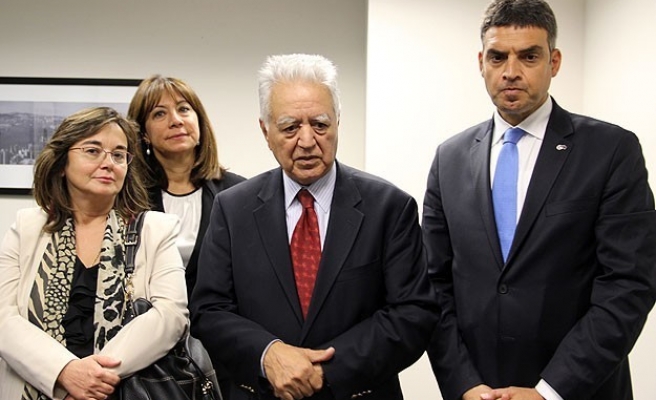 “Where CHP's views were once just a matter of interest, now we are faced  with more comprehensive and detailed questions, and this gives me the impression that the US consider CHP as the potential ruling party in the next term," Republican People’s Party (CHP) Deputy Chairman Faruk Logoglu said.

CHP's two deputy chairs Logoglu and Umut Oran spoke to Turkish journalists on their second day in Washington, after holding several talks at the White House, State Department and Pentagon.

Noting that the purpose of their US visit was to share CHP's views on Turkey's domestic and foreign issues ahead of an anticipated visit to the U.S. by party leader Kemal Kilicdaroglu, Logoglu said that his general impression from the meetings so far was that the US closely monitored the developments in Turkey, and were deeply concerned about the consequences.

Regarding CHP'S view on US-Turkey relations, Logoglu said that they preferred "strong and sustainable relations based on common values and interests, regardless of the conjuncture", and that they shared this with US officials.

Referring to a question posed at Pentagon, Logoglu said they (CHP), as well as about 70% of the Turkish population were against a US military intervention in Syria; however, they agreed with the US on finding a political solution.

As for a question regarding how the US administration and Congress viewed the ruling AK Party, Logoglu said that "lately the US officials have been able to express their concerns more freely compared to previous visits, albeit not directly".

Logoglu added that they also met with a representative of the pro-Israel lobby group, AIPAC.

In response to a question about whether there was a discord between the Prime Minister Recep Tayyip Erdogan and President Abdullah Gul, Logoglu noted that since Gul served as a Foreign Minister for about 4 and a half years, and represented Turkey on various international platforms, he had an extreme wealth of knowledge which influenced his choice of words and mentality. Saying this was the reason why Gul always had a more careful and restrained discourse, Logoglu said "Nonetheless, it would be quite an exaggeration to see this as a deep difference of opinion between the President and Prime Minister."

Meanwhile, Umut Oran said in response to Foreign Minister Ahmet Davutoglu’s remarks on Kilicdaroglu accusing the latter of hypocrisy: “Actually, Mr. Davutoglu needs to look in the mirror and see who is really a hypocrite. He should remember what the Prime Minister said about Assad two years ago, what he said during the meetings, and the pictures published in Turkish newspapers, and compare them with his current statements resembling a Minister of War. Then he could clearly see what a hypocritical policy is. .... It is Mr. Davutoglu and his government who are the real hypocrites in foreign policy".

Oran also said that the US implied that the current judicial system in Turkey was partial and dependent.