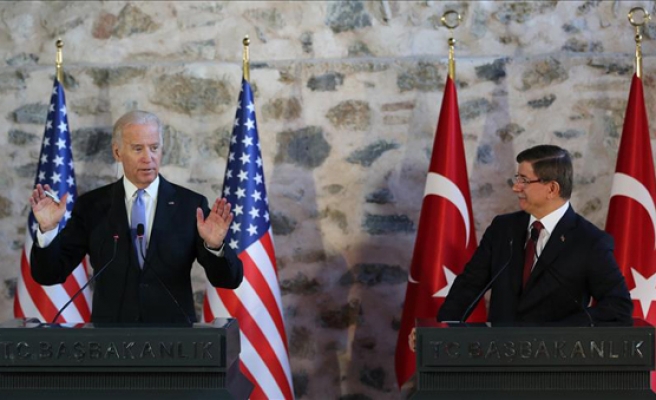 U.S. Vice President Joe Biden has said there is "no difference" between ISIL, PKK and al-Nusra qualifying the three groups as "terrorist groups ".

"They are simply terrorist groups and here in Turkey, they threaten and do harm and are of severe consequence to the interest of the people of Turkey and we do recognize that."

Reiterating that Turkey was a "strategic partner" of the U.S., Biden said Turkey has been taking "very important" steps to improve security.

Biden said ISIL was not only a danger to Europe but more particularly to Turkey.

Davutoglu also said terrorism did not threaten only one country. Rather it threatened all neighboring countries.

"Whichever ethnicity terrorism is coming from, it is a humanitarian crime. We do not see any difference between PKK, al-Nusra, DHKP-C[far-left terrorist organization in Turkey], ISIL," said Davutoglu.

Davutoglu added both the U.S. and Turkey were sensitive to the fight against all terror organizations.

"Turkey sees three threats in Syria: One is the regime, another is ISIL, and third is the YPG," said Davutoglu, adding that the YPG (Kurdish People’s Protection Units) was part of the terrorist organization PKK.

He said that Turkey did not want to see either ISIL or PKK elements near its borders.

Davutoglu also said the PKK presence in Iraq required that Turkey bring fight to the PKK and ISIL in the region. Biden is to meet Turkish President Recep Tayyip Erdogan next.