Referendum results carry a significant message for all political parties in Turkey, rather than simply a victory or a defeat. 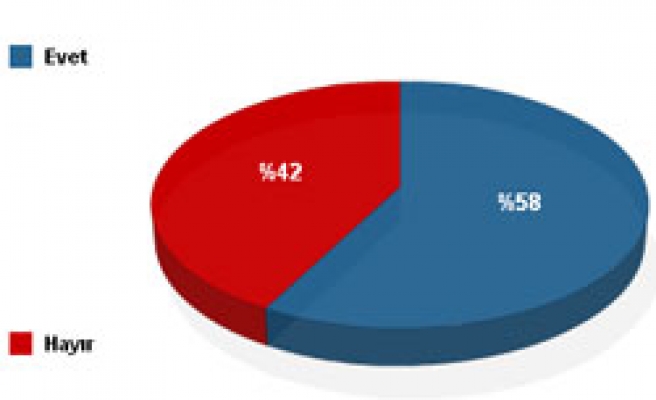 The results of the Sept. 12 referendum on the constitutional amendment package carry a significant message for all political parties in Turkey, rather than simply a victory or a defeat, based on the distribution of yes and no votes throughout the country.

The distribution of votes shows that the Republican People's Party (CHP) was unbeatable in provinces on the Mediterranean and Aegean coast, which the party claims to be its strongholds. Coastal cities -- including İzmir, Aydın, Muğla, Antalya, Mersin, Çanakkale and Edirne -- overwhelmingly voted against the constitutional changes.

Voters in provinces on the Black Sea coast as well as in the heartland of Anatolia supported -- with a crushing majority of votes -- the constitutional amendment package. Many central Anatolian cities, including Sivas and Yozgat, also voted in favor of the package although they have traditionally been strong supporters of the Nationalist Movement Party (MHP).

The MHP administration fervently opposed amending the Constitution, but its grass roots thought differently. The supporters of the party are known to have suffered the most at the hands of the military junta that staged the 1980 coup d'état. The incumbent Constitution was ratified in a referendum in 1982 after the coup. There was a strong demand within the MHP to amend the Constitution, but the party administration acted against this demand and failed to secure the support of its grass roots in the referendum.

Observers believe that the MHP administration may face a dramatic change after the defeat in the referendum.

A victory of the CHP in coastal cities and the victory of the AK Party in the heartland of Anatolia, however, do not spell a real victory for Turkey. The referendum has shown that political polarization has grown stronger in those cities. There, voters seemingly voted for the AK Party or the CHP rather than the constitutional amendment package.

The distribution of votes hints that both of the parties should display a more “welcoming” attitude toward all voters.

The primary reason behind a clear discrepancy between provinces in terms of the number of “yes” and “no” votes is the culture and lifestyle of voters there. The CHP and its leader, Kemal Kılıçdaroğlu, knew how to make use of the differences between supporters and opponents of the constitutional amendment package. During CHP rallies all across Turkey, Kılıçdaroğlu worked to turn the voting on the content of the constitutional amendment package into a confidence test for the AK Party government. He argued that if a “yes” vote emerged out of the ballot box, it would strengthen the pressure of the ruling AK Party on the judiciary and damage the gains of secular Turkey.

As a result, most members of the “no front” voted against the constitutional changes due to their dislike of the AK Party and its leader rather than the deficiencies of the amendment package.

According to Professor Nevzat Tarhan, a psychologist and former military officer, the results of the referendum and the distribution of votes show that Turkey needs new “initiatives.” “We need new steps to overcome social fears. The referendum results are positive, but Turkey will lag behind world standards if it settles for what it has achieved,” he noted.

Nasuhi Güngör, a columnist for the Star daily, drew attention to the fact that the CHP and the MHP got caught in coastal areas, and thus they need to revise their policies. He said the referendum results will spur both parties to question the quality of their leaders. “It is obvious that the CHP and the MHP will not dare to cooperate, either plainly or covertly [against the ruling AK Party] in the next elections,” he added.

For the pro-Kurdish Peace and Democracy Party (BDP), the referendum results carry a strong message in terms of the free will of voters.

The party forced its voters in eastern and southeastern cities to boycott the ballot box, arguing that the constitutional amendment package did not address the urgent needs of Kurds.

Kurdish voters, however, thought the contrary. There was a strong demand from Kurdish-populated areas for the removal of all traces of the 1980 coup era. After the coup, the use of Kurdish in public was banned and Kurds were denied cultural and political rights for a long time.

The BDP turned a blind eye to growing demands from its grass roots and did not allow Kurdish voters to go to the ballot box on referendum day.

The participation rate in the referendum in eastern and southeastern cities was rather low, but votes cast showed that Kurdish voters strongly supported the constitutional amendment package.

In Diyarbakır, for example, only 35 percent of voters cast a vote. “Yes” votes were over 94 percent at the ballot box there. Diyarbakır is known to be the stronghold of the BDP.

Analysts believe the BDP should revise its policies in accordance with the “real demands” of Kurdish voters, and should not stand against their will in the next elections.