A confidential witness said, members of the military are responsible for the death of the former leader of BBP Yazıcıoğlu, who died in a helicopter crash in 2009 along with five others. 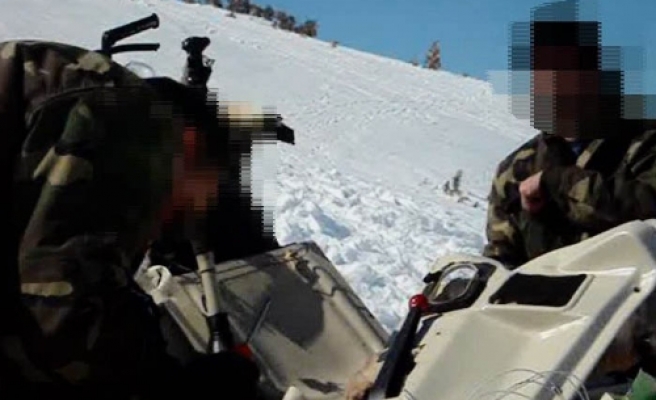 A confidential witness told prosecutors on Monday that members of the military who ordered a rescue team to search at incorrect coordinates are responsible for the death of the former leader of the Grand Unity Party (BBP), Muhsin Yazıcıoğlu, who died in a helicopter crash in 2009 along with five others.

The investigation of Yazıcıolu's mysterious death entered a new era when an unknown army officer sent a video to President Abdullah Gül of the helicopter crash site where Yazıcıoğlu and five others perished. Officers can be seen in the video; one is removing the black box containing two recording devices from the front panel of the helicopter, while two others look on. A fourth officer is thought to be shooting the video.

Within the scope of the Malatya Prosecutor's Office's investigation, a witness named Bora told prosecutors that Lt. Col. Hamza Tiryaki from Kahramanmaraş Gendarmerie Office, who was in charge of coordinating the rescue efforts, telephoned the team who went to search for the crashed helicopter. He claimed that Tiryaki ordered the team to search incorrect coordinates for the wrecked helicopter, saying "You move to the place I say, check out the circumstances, and if needed stay there till you die."

When prosecutors asked Tiryaki if these were his words, Tiryaki said: "I do not remember saying such words. I did not have any issue or anything to do with those who were in the crashed helicopter. There is no reason for me to act in such a way. I strongly deny all these claims."

Prosecutors asked Tiryaki why the search operation was carried out in a region that had nothing to do with the coordinates of the crash site. "The coordinates of the spot where the crash occurred were not given to us, but we were given coordinates for a region where we searched. A major from the Armed Forces called me. He provided details about the Kurucaova region. I can't remember his name well. If you check the cell phone calls made that day, you can get that major's name," said Tiryaki.

Malatya prosecutors asked Tiryaki why the rescue operation was continued in an inappropriate region when villagers notified the gendarmes, stating that the helicopter was heading towards the Karayakup region minutes before the crash. Tiryaki said that it was the pilot's fault for flying the helicopter in that direction.

"There was no need for the pilot to fly the helicopter at a low altitude. It was also too foggy that day. Even though the information from the villager did not sound very convincing to me, I still considered his words and took appropriate actions that day. The villager stated that his sons has seen the helicopter [going towards Karayakup], and some news even said that Air Force planes forced the helicopter to crash, and if this villager's sons were telling the truth, he would have also seen Air Force planes too," Tiryaki said to prosecutors.

Tiryaki was asked if he knows the whereabouts of Yazıcıoğlu's briefcase and cell phone memory card. He said he does not know where they are.

A villager, Abdullah Göllü, stated he had seen a bag full of banknotes, but he did not tell anyone about this, and his cell phone's memory card was taken by someone who told him he could be in danger if he kept the card. "The bag was frozen. When we returned to the scene of the incident, I saw the interior minister present at the scene and I told him all I saw and experienced regarding the crash. After speaking to the minister, I was leaving the scene and a person came up to me and asked for my cell phone's memory card and said that this memory card would bring harm to me and my family, and he took the card from me," said Göllü.

According to Yazıcıoğlu's widow, Gülefer Yazıcıoğlu, it is clear that the helicopter crash was not an accident but a planned assassination, and she knows the military officers in the video. "I guess a further step is expected to deepen the investigation; however, things are actually very clear [that the crash was not an accident]. People who participated in the rescue operation must be investigated. Things are slowly coming to light. Now it is the prosecutors' job to carefully investigate. We will be watching the case very closely," said Gülefer Yazıcıoğlu.