Life in Ramadan begins after iftar in Sarajevo

Resembling a deserted city until iftar, the Muslim fast breaking dinner, Sarajevo gains a new identity as soon as the call to evening prayer is sounded. 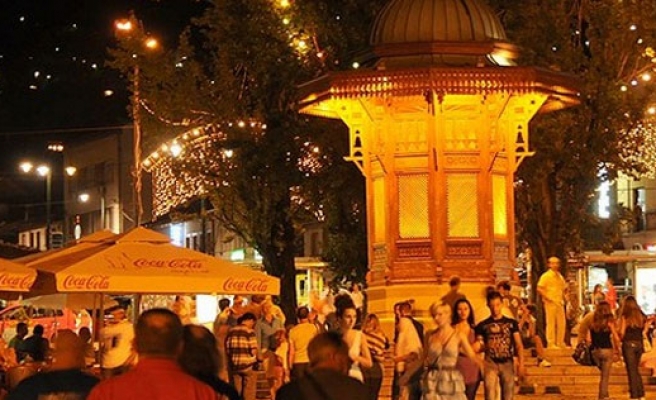 Spending their daytime by fasting, Muslims in the Bosnian capital Sarajevo start their daily life in Ramadan after fast breaking meal of iftar.

Resembling a deserted city until the iftar time, Sarajevo gains a new identity as soon as the evening adhan, the call to prayer, is sounded from the minarets and the Ramadan artillery is fired from Sari Tabya.

Muslims in Sarajevo prefer to gather either at home or in modest restaurants for iftar meal to break their fast.

They end up in the Islamic lodges hosting religious conversations as well as the historical inns where tea, coffee and narghile or waterpipe, accompany nostalgic friend talks after performing their Tarawih prayer in the historical mosques of Sarajevo following the iftar.

Rushing to the most crowded streets of Sarajevo like Saraclar and Ferhadiye, Muslims chat as they sip the Bosniak coffee in cute cafes until the sahoor meal, the early morning meal eaten by Muslims prior to fasting before fajr or dawn during the Islamic month of Ramadan.

Elvedin Cigal, a frequent of the historical Bascarsi, told the Anadolu Agency that Sarajevo has a different atmosphere in Ramadan.

''In Ramadan, people gather, eat iftar meal and perform the Tarawih prayer together. The month of Ramadan instills a unique feeling and beautify people," added Cigal.