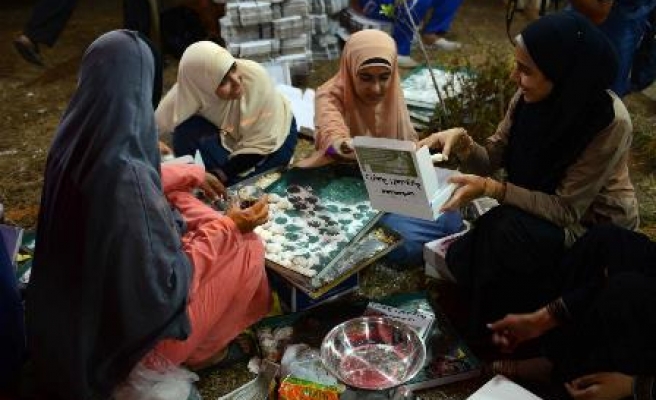 Amid chants of "Allahu Akbar (God is Great)", supporters of ousted president Mohamed Morsi camped out in Rabaa al-Adawiya Square are busy preparing trays full of cookies to celebrate the Islamic festival of Eid al-Fitr.

"We want to show that we are enjoying our sit-in," Mohamed Abdel-Kawi, a protester from the governorate of Menoufiya, 75 km north of Cairo, told Anadolu Agency.

Egyptians are expected to celebrate Eid al-Fitr, which marks the end of the fasting month of Ramadan, later this week.

In their local tradition, Egyptians usually welcome the feast with cakes and cookies (pronounced as kahk).

Abdel-Kawi's wife has travelled 100 km from her village to join other Morsi supporters in the square in preparing trays of kahk for the festival.

"My wife is visiting the square for the first time to celebrate this very important festival," Abdel-Kawi said.

Ever since his July 3 ouster by the army, Morsi supporters have been staging a round-the-clock sit-in in Rabaa square to demand his reinstatement.

A senior military source told Reuters on Monday that the army and government will offer to free some Muslim Brotherhood members from jail, unfreeze the group's assets and give it three ministerial posts in a bid to end the country's political crisis.

But the report about the offer has unfazed the pro-Morsi protesters.

"We are not bored," said Abdel-Kawi.

Saniya Ahmed, a female supporter of the ousted president, is also unfazed.

"We won't leave our place until the legitimate president is reinstated," said Ahmed, who is known for her experience in making kahk.

The political turmoil has not impacted the traditional Egyptian celebration of Eid al-Fitr.

"Despite the unrest and high prices, the demand on kahk is high as previous years," Mohamed Khalid, a worker in a sweets store, told the AA.