Ramadan iftars a bridge from Turkey to Balkans

The "Brotherhood Knows No Borders" project organized by the Turkish municipality of Bayrampaşa is touring the Balkans, hosting the iftar meal with which Ramadan fasts are broken. 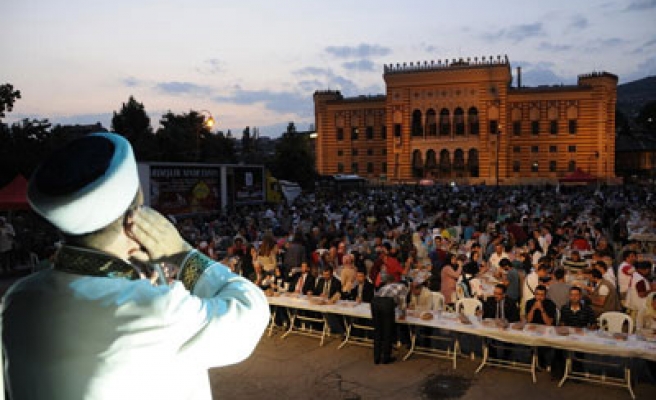 The "Barakah (Blessing) Convoy of Abundance," which is currently in Bosnia-Herzegovina as part of the "Brotherhood Knows No Borders" project organized by the Turkish municipality of Bayrampaşa, hosted a traditional iftar meal in Sarajevo. The iftar is the meal with which Muslims break their fast during Ramadan.

The iftar held at the edge of the Milyatska river was attended by Bosnians as well as Turks living in Sarajevo.

After the meal at which guests were served meat, rice and dessert, the Quran and prayers was recited.

In his speech, Bayrampaşa Mayor Atila Aydiner said that the convoy, consisting of 80 volunteers, 4 trucks and 2 buses, intended to tour the Balkan countries and hosts iftars in order to strengthen the bridges between Turkey and the Balkans.

Aydiner specified that the convoy would be at the Bosnian city of Mostar tomorrow, and would later visit Montenegro, Kosovo, Albania, Macedonia, Bulgaria and Greece to hold iftars.