About a thousand people are served iftar, the evening meal for Muslims to break their fast during Ramadan, at "M-30 mosque" in Madrid due to Ramadan. 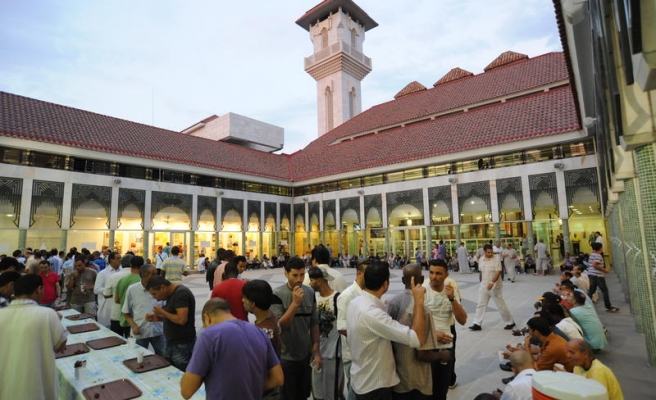 About a thousand people are served iftar, the evening meal when Muslims break their fast during the fasting month of Ramadan, at "M-30 mosque" which is known as the Mezquita M.30 in Madrid, Spain because it stands as the largest mosque in Europe.

M-30 mosque becomes a meeting spot for Muslims particularly during the fasting month of Ramadan. Free iftar meals are served at the mosque due to Ramadan and mostly Moroccan, Saudi Arabian, Egyptian and Syrian Muslims living in Madrid attend this mosque.

A big solidarity is experienced among the Muslims. People who gather in the yard of the mosque and break their fast by eating persimmons later perform their evening prayers and have their iftar meals in the restaurant together.

Speaking to Anadolu Agency, Muslims breaking their fast at the mosque said they had their best Ramadan in their own countries and missed their families and motherlands especially in this holy month.

A six-storey complex named as the Centro Cultural Islámico (Islamic Cultural Center) in Madrid has a school, a library, a museum, an exhibition hall and an auditorium as well as a mosque. Its real name is 'Omar Mosque', but it is called as 'M-30 mosque' among people as it stands beside M-30 motorway.