Ramadan stirs up solidarity among Muslims

Muslims around the world stirred up solidarity in the holy month of Ramadan. 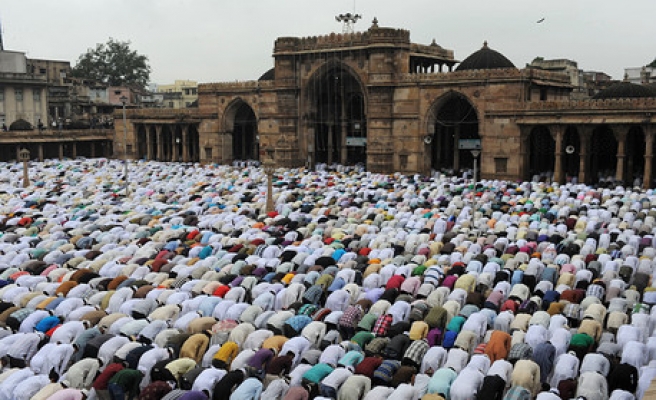 Muslims around the world started to relish feeling of unity and solidarity as they come together in mosques and iftars, fast breaking dinners, in the holy month of Ramadan.

Muslims in Jerusalem welcomed Ramadan in Al Aqsa mosque, the first qible, where is the direction Muslims turn to while praying. However, it is not easy to reach Al Aqsa mosque for Muslims live in West Bank on this day due to the difficulties caused by Israeli officials at check points.

The joy and dynamism of Ramadan also can also be observed in the markets. In old town of Jerusalem, bazaars were filled with people seeking to buy sweets, spices and gifts.

Old town is illuminated during the holy month which mesmerizes those who visited there to enjoy shows particularly organized for Ramadan.

As in many Middle Eastern countries like Iraq, Ramadan starts one day before Turkey. Like many year, residents of Erbil rushed to historical bazaar called Kayseri Bazaar, with a clear reference to Turkey’s central city of Kayseri. Kurdistan Regional Government (KRG) as well as central government in Baghdad made a gesture to government officials by reducing the working hours. In Ramadan, flow of daily life has completely changed. For having iftar people go out and eat fast breaking dinner with friends and relatives. After iftar several special entertainments are organized till sahur, pre-dawn meal. Suffering from political instability and violence, Iraqis pray for peace and prosperity.

NGO’s and government distribute food to poor in Tunisia

In Tunisia where preparations for Ramadan has begun some weeks ago, charity organizations along with government offices gear up to organize activities to help poor. Packages filled with foods are readied everyday and NGO’s as well as state institutions distribute them to poor people especially living in rural areas. As a hundreds-year tradition Tunisians went to Zeytuna Mosque for terawih, a particular night praying only for Ramadan, which is the second oldest mosque in the country.

Like in many Muslim countries, people spent weeks for shopping before Ramadan. As it is expected, the top of the shopping list is occupied again by dates. Although the prices increased before Ramadan, they are still affordable. The price ranges from 5 to 7 lira.

One mosque does not meet Muslims needs

The center of Muslims living in Sofia, Bulgaria’s capital is again in this Ramadan Kadı Seyfullah Efnedi mosque. Although it is under renovation, the mosque is opened to serve Muslims in the holy month. The Mufdi of Sofia, Mustafa İbishtali said it is a big problem that more than 70 thousand Muslims have to pray in a relatively small mosque.

The demand to build an iftar tent next to the mosque, to provide free meal to poor, has been refused by the government for the tent is not proper for the city planning and it may create some tension with anti-Muslim sentiments. The iftar given in the yard of the mosque is a unique opportunity for the immigrants who have to live under poor conditions. However, unfortunately for financial restrictions, iftars can be given only for the first 15 days of the holy month. The mosque administration declared they are open to any help for the rest of Ramadan.

One thousand Muslim breaks their fast with Pulov in Bishkek

The first teravih, practiced in Kyrgyzstan capital, Bishkek’s Central Mosque was a remarkable time when thousands of Muslims come together with a deep excitement. Although Ramadan days are extremely hot in the country where 87 percent of population is Muslim, a strong sense of enthusiasm surround the mosques in the country. Starting preparations from the evening in the gathering point of Bishkek’s Muslims, Central Mosque, the iftar composed of traditional cuisine especially are given everyday. Pulov, which is a special central Asian meal made with meat and rice after boiling them for 6 hours has a special place in iftars in the Central Mosque where nearly one thousand Muslim attend.

Like the rest of Muslim world, Ramadan is welcomed also by joy and excitement in Macedonia, a multi-ethnic country having Muslims which constitutes 40 per cent of total population. State officials, as in the past, issued messages regarding tolerance and solidarity and celebrated Muslim’s holy month. The leader of Macedonia’s Muslim Unity Süleyman Recepi expressed wishes for peace and tranquility in his message issued for arrival of Ramadan. Continuing for centuries, Muslims of Macedonia have iftars with their families and go to mosques for teravih.