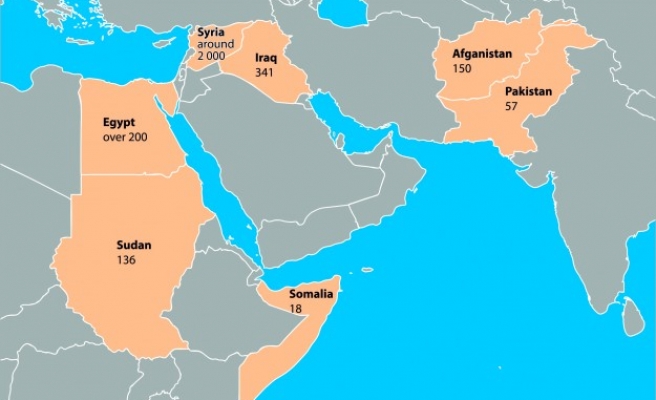 Blood and tears kept on flowing through the streets of Islam countries despite the holy month Ramadan, regarded as the month of peace, tranquillity, and prosperity.

Around 3,000 people died during Ramadan in aforementioned countries. Neither efforts nor calls to ensure ceasefire during the holy month came up with the expected results.

In Syria, where civil war have been continuing since March 2011, the number of deaths is over 100 thousand, says UN data service.

Moreover, the number of refugees going to neighbouring countries exceeded 1 million while hundreds of thousands got wounded during the clashes.

During Ramadan, around 2 thousand Syrians died and thousand were injured across the country.

Following the military coup in Egypt on July 3, which ousted the country's first democratically elected President Mohammad Morsi, conflicts between the army and anti-coup protesters ended in the deaths of hundreds of people.

When Egyptian army opened fire at anti-coup protesters in Cairo's Rab'a Al-Adaweya Square, over 200 people were killed and hundreds of others were severely wounded.

Some other deadly attacks also took place against pro-democracy protesters during Ramadan.

In central and northern parts of the country, on the other hand, anti-government protests were also held against Iraqi Prime Minister Nuri al-Maliki.

Attacks in Pakistan and Afghanistan

Blasts, which struck a busy market in Parachinar, killed 57 people in Pakistan on July 26 and left hundreds of people wounded.

Parachinar, inhabited densely by Shias, has suffered a lot from the terrorist attacks which also targets at Pakistani security forces at times.

In Afghanistan, the army and the police have been conflicting with Taliban, which is getting prepared to dominate across the country in 2014 when NATO forces withdraw.

During Ramadan, 150 people died in the bomb attacks of Taliban movement, which has been seeking to overthrow the U.S.-backed government and terminate foreign occupation in Afghanistan.

Attacks by Al-Shabaab in Somalia

Al-Shabaab, known as the Somalia-based cell of the terror group al-Qaeda, carried out deadly attacks during Ramadan in which 18 people died.

Al-Shabaab previously claimed responsibility for the attack on Turkish Embassy in the Somali capital of Mogadishu which killed one Turkish security guard and left several others injured.

In addition to the problems between Sudan and South Sudan over security and oil, countries also face severe conflicts between tribes which kill each other.

On July 31, fights between two tribes killed 136 people in Darfur.

Tribal disputes have been driven by conflict over resources including land, water and mineral rights, observers say.

In Ethiopia, fire was opened at Muslims protesting against the government over discrimination, which ended in 3 deaths and many injured people.