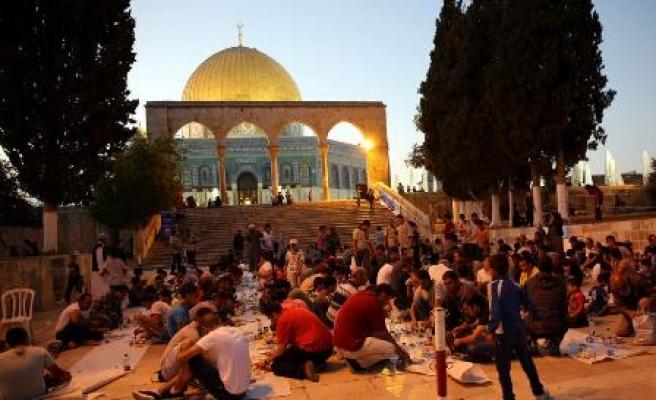 Turkish charity organization 'Sadaka Tasi' set iftar meals for a thousand people on the left side of Omar mosque, where Turkish non-governmental organization (NGO) 'Kimse yok mu' prepared tables for 300 people on the other side on Friday evening.

All of 500 umbrellas covering al-Aqsa mosque's backyard were donated by Sadaka Tasi to ease Muslims' prayer during hot weather, head of the organization Cihat Turkoglu told AA in an exclusive interview, and said they "would provide iftar meals for a thousand people every day until Ramadan ends."

Jerusalem representative of Kimse Yok mu Eyup Tok stated they donated iftar meals for 300 people each year, adding, "We will supply food parcels to 1,620 families. 1,000 of these are the families including orphans. At the end of Ramadan, we will buy new clothes for 100 Palestinian children."

Meanwhile, another Turkish NGO "Mirasimiz" take care of remained monuments from the Ottoman period with the aid, coming from Turkey, besides giving iftar meals. Foundations like 'Yardimeli' and 'Cansuyu' give also support to the organization.

Some other Gulf countries also finance some iftar meals in al-Aqsa mosque.