The Brotherhood gained popularity over the years for running social and medical services for the poor and distributing free or cheap food, drawing accusations from opponents of mixing charity with politics. 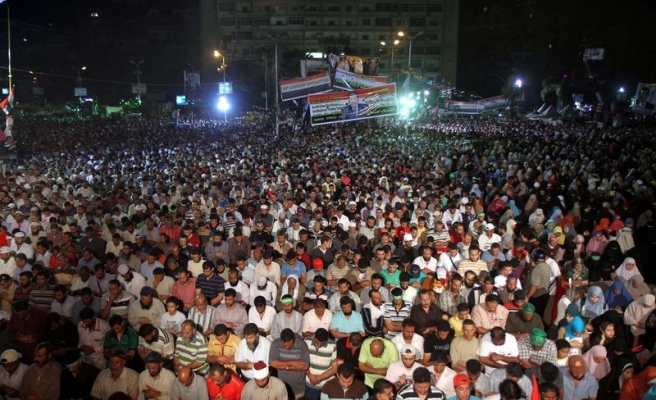 Every year, the holy month of Ramadan keeps Ibrahim Abou-Ouf busy like no other month, shuttling from one house to another in order to deliver food parcels to needy families.

However, this year's Ramadan coincided with a wave of political turmoil that engulfed Egypt and shook the group to which Abou-Ouf belongs, the Muslim Brotherhood.

Thousands of Muslim Brotherhood members have taken to the streets of Cairo and nationwide to call for the reinstatement of Mohammad Morsi, Egypt's first democratically elected president who was ousted by the army following mass demonstrations against his administration.

The Brotherhood vowed that its members would keep protesting until the deposed leader is restored to office, which is keeping many of its members away from their home villages.

"The majority of Brotherhood youths joined the sit-ins across Egypt, but this has not prevented some units from carrying out their usual charity activities," Abou-Ouf, who serves as the group's secretary in the Delta governorate of Dakahlia, told Anadolu Agency.

"The Brotherhood's charity committees exist in all villages and towns, and they are trying to carry out their activities under any circumstances, though, naturally, we are affected by the current circumstances."

The Brotherhood gained popularity over the years for running social and medical services for the poor and distributing free or cheap food, drawing accusations from opponents of mixing charity with politics.

"Charity is one of the pillars of Da'wa, and it would not stop despite being affected by the current political unrest," Azab Mostafa, a senior Brotherhood member, told the AA.

"Although our Ramadan activities were affected by the political hardships, we have not stopped and will never stop.”

Abou-Ouf agrees; "The impact on the group's other activities would not remain for long, because the group has always been able to rebuild its ranks and carry out its various activities despite all hardships.”

Amr el-Sayed says his committee is a case in point.

"In our committee, this Ramadan was business as usual. Ramadan packages were ready and distributed despite the recent developments," he said.

"It’s different from one committee to another. Some committees scrambled to carry out their tasks despite the situation."

Many Brotherhood members believe charity works should not stand as a barrier to advocating their group's stances towards the country's affairs.

Mostafa, the senior leader, goes even a step further.

"Being in the squares is one of best charity activities presented by the Muslim Brotherhood to the Egyptian people to protect their future."