The WGS network is used to relay television broadcasts, conferences, images and other high-bandwidth data to and from ships, aircraft, ground forces, operations centers, the U.S. Department of State, the White House and select partners worldwide. 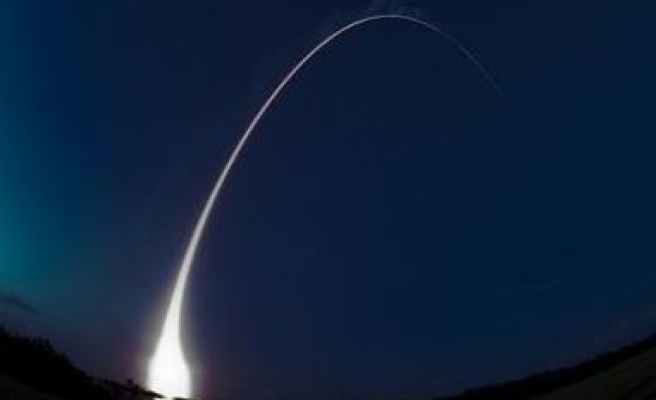 An unmanned Delta 4 rocket blasted off from Cape Canaveral Air Force Station in Florida on Wednesday carrying a communications satellite for the U.S. military and its partners, including Australia, which paid for the spacecraft and launch services.

The Delta rocket, topped with the sixth Wideband Global Satcom, or WGS, spacecraft lifted off at 8:29 p.m. EDT (0029 GMT) and soared out over the Atlantic Ocean, illuminated by the setting sun, as it headed into space.

The WGS network is used to relay television broadcasts, video conferences, images and other high-bandwidth data to and from ships, aircraft, ground forces, operations centers, the U.S. Department of State, the White House and select partners worldwide.

"A Navy ship can be operating in X-band ... and communicate with someone else operating with a Ka-band terminal, and vice-versa. The satellite does that conversion for them. That way we can cross-talk across the services and across capabilities," Madden said.

X-band and Ka-band refer to parts of the electromagnetic spectrum used to relay communication signals.

In an unusual partnering arrangement with the U.S. Air Force, Australia paid $707 million for Boeing to build the satellite and for United Launch Alliance, a partnership of Boeing and Lockheed Martin to put it into orbit. Australia's tab also covers some operational expenses.

In exchange, Australia can use a percentage of the WGS network through 2029, when its 22-year agreement with the Air Force expires.

"This sharing of resources is very consistent with what the Department of Defense wants to do to form stronger coalitions with our allied partnerships, to share costs of operations," Madden said. "It really helps all parties."

The Air Force has a similar agreement in place with Canada, Denmark, Luxemburg, Netherlands and New Zealand, which are banding together to pay for the ninth WGS spacecraft.

The U.S. military currently is seeking one or more partners to finance follow-on satellites, Madden said.

Wednesday's launch came three months after the fifth WGS satellite reached orbit. The first spacecraft in the constellation, WGS-1, was launched in October 2007, followed by WGS-2 and -3, in 2009. Those satellites, designated Block 1, cost a combined $800 million.

The first Block 2 satellite, WGS-4, was launched in January 2012. It and WGS-5 and -6 cost a combined $1.2 billion. The next group of four satellites, currently in production, will cost some $1.6 billion, the Air Force said.