Now scientists hope to learn whether life-friendly niches on Mars are common and whether any organic carbon has been preserved in the planet's ancient rocks. 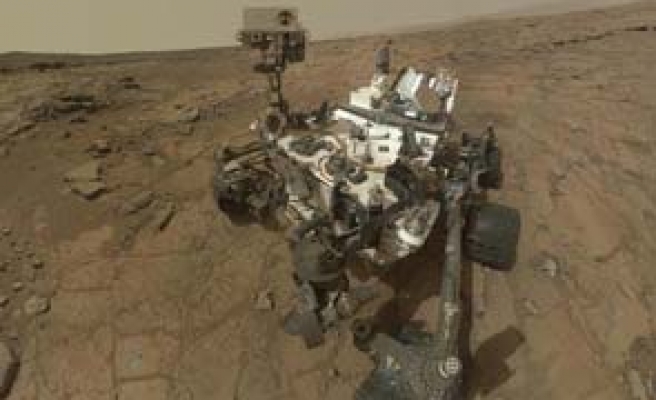 The NASA rover Curiosity survived its daredevil landing on Mars one year ago Tuesday and went on to discover that the planet most like Earth in the solar system could indeed have supported microbial life, the primary goal of the mission.

"The stunning thing is that we found it all so quickly," California Institute of Technology geologist and lead project scientist John Grotzinger said on Monday during a ceremony at NASA's Jet Propulsion Laboratory in Pasadena, California, marking the rover's first anniversary on Mars.

"If you asked me a year ago, 'What are you going to find in the first year?' I wouldn't have ever said we were going to find what we went looking for," added Curiosity scientist Ken Edgett, with Malin SpaceScience Systems in San Diego.

Now scientists hope to learn whether life-friendly niches on Mars are common and whether any organic carbon has been preserved in the planet's ancient rocks.

To answer those questions, Curiosity is heading to Mount Sharp, a three-mile high (five-km) mound of layered sediment rising from the floor of Gale Crater, where the one-ton rover touched down at 1:31 a.m. EDT (0531 GMT) on Aug. 6, 2012.

To land that much weight in such a specific location, engineers devised a complicated descent system that included a never-before-tried hovering platform that gently lowered the rover with tethers onto the planet's surface and then, so it wouldn't land on Curiosity, was directed away to crash-land elsewhere.

The drama, which a NASA video dubbed "the seven minutes of terror," opened with rocket burns to slow down Curiosity from its 13,000 mph (21,000 km per hour) interplanetary cruising speed and direct it into the thin Martin atmosphere.

Within seven minutes, the rover dropped from seven times the speed of sound to zero, shedding a heat shield, parachutes and the hovering platform in the process.

"I've probably seen that video 100 times in the last year and you still think about how you felt that night, still in wonderment that it really did what it did," said NASA project manager Pete Theisinger.

Rather then heading first to Mount Sharp, scientists decided to explore a region that showed telltale signs of past flowing water. Drilling into a piece of bedrock, the rover found all the chemicals needed to support simple microbial life, such as microorganisms that rely on chemicals rather than sunlight, for energy.

"It all added up to an understanding of this environment as being chemically favorable for life - not in a harsh way, but actually quite a benign environment that is very much like Earth," Grotzinger said.

Curiosity is expected to be joined next year by another NASA robotic probe, called MAVEN, which will remain in orbit to assess how and why the planet is losing its atmosphere.

MAVEN's data will be combined with ongoing studies by Curiosity, NASA's long-lived Mars rover Opportunity, and a trio of orbiters, including the European Space Agency's Mars Express, to better understand how a planet that seemed to start off so much like Earth ended up so different.

MAVEN arrived at the Kennedy Space Center in Florida on Friday. It is scheduled to launch from the nearby Cape Canaveral Air Force Station on Nov. 18 and arrive at Mars in September 2014.