Alaska’s unusually hot summer has been suffering from choking smoke from an extended wildfire season, flooding rivers due to fast-melting snow and glacial ice, and fish covered in algae. 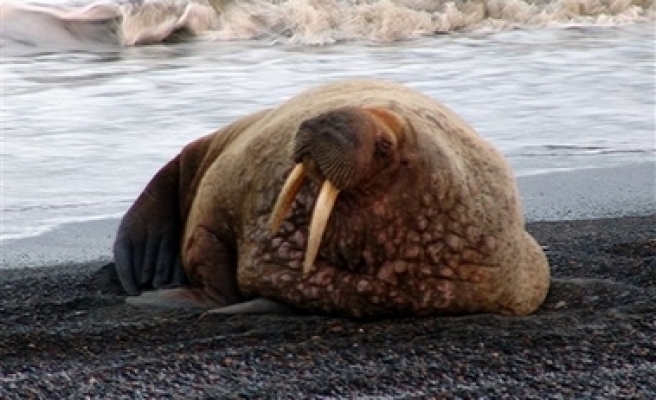 Alaska residents have been enjoying an unusually warm, sunny summer, but the pleasant weather has come at a cost: choking smoke from an extended wildfire season, flooding rivers due to fast-melting snow and glacial ice, and fish covered in algae.

Wildfires have burned 1.25 million acres (500,000 hectares) across Alaska this summer, according to the state's fire-management center, the Alaska Interagency Coordination Center. Seventy fires were active on Friday, including a 57,870-acre (23,400-hectare) blaze near Delta Junction, about 95 miles (153 km) southeast of Fairbanks.

The fire season usually winds down in late June or early July, but not this year, said Jim Schwarber, a spokesman for the center.

The fire near Delta Junction created such smoky conditions that residents were advised earlier this week to stay indoors. Air quality was classified by the Alaska Department of Environmental Conservation as "very unhealthy," the second-worst category used by regulators.

"The smoke situation in Delta was really grim for a while," Schwarber said. Smoke from fires closer to Fairbanks forced the cancellation last weekend of a high-school football festival.

This year's fire season is part of long-term pattern of more frequent big burns, Rick Thoman, climate science manager for the National Weather Service in Alaska, said in a conference call on Thursday. Since 1988, there have been 11 summers with over 1 million acres (400,000 hectares) burned in Alaska, nearly twice the rate of big-fire years recorded from 1940 to 1987, he said.

Prolonged summer wildfires are "a direct result" of hot weather across Alaska, Thoman said. The average temperature in June in Barrow in the northern tip of the state was 39 Fahrenheit (4 Celsius), the highest on record, and that city had its warmest-ever combined June and July temperatures, according to the weather service.

Anchorage, the state's largest city, tied its record for the warmest-ever combined June and July temperatures, and had a record 15 days of consecutive 70F-plus (21C) days.

Fairbanks' 36 days of temperatures of 80F (27C) or above shattered a record of 30 days achieved most recently in 2004. The coastal cities of Valdez and Cordova had their first-ever 90F (32C) days in June, and the eastern Alaska town of Eagle hit 92F (33C) on Monday, a record for this late in the summer, the weather service said.

Heat brings more problems than just wildfires, Thoman and other experts said. Hot and dry conditions are stunting spruce tree growth in interior Alaska, and adding to stress for nearly all species of trees in the northern forest, he said.

Ocean fish have been found covered with algae, possibly a result of hotter sea-surface temperatures, Thoman said. Streams and rivers fed by glaciers and snowpack have been gorged by meltwater, causing sporadic flooding, while rain-fed waterways in parched areas have been running dry, he said.

Thoman cautioned against blaming Alaska's hotter temperatures on the rapid climate change documented in the Arctic, where sea ice has been shrinking at an alarming rate.

"The variability in the weather and climate that we've seen this season I wouldn't want to tie directly to those longer-term changes in the Arctic, except for those parts of Alaskathat are in the Arctic - on the North Slope, for instance," he said.

"Is this summer the result of something that's going on in the Arctic? That's not clear," he said. But the summer temperatures "may be consistent with the changes that people are seeing" in Arctic sea ice, he said.

Whatever its causes, the warm and sunny days in normally rain-drenched Juneau have been pleasant, Krenz said.

"We're already talking about how, in five years when it's going to be all rainy, we'll be saying, 'Remember that summer of 2013?'" he said.