Most computer models of climate change indicate the ice could disappear in summer in 30 to 40 years, said Lars-Otto Reiersen, head of the Arctic Monitoring and Assessment Programme. 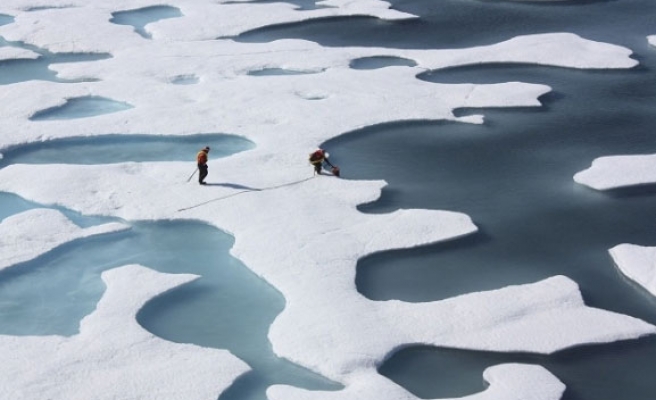 Ice on the Arctic Ocean could vanish in summertime as early as 2015 or linger for many decades after a thaw to a record low this month that is widely blamed on climate change, according to scientists.

Huge variations in climate experts' predictions complicate long-term plans by everyone from indigenous peoples who depend on ice for hunting to shipping firms hoping for new trans-Arctic shipping routes and oil firms seeking new areas for drilling.

Most computer models of climate change indicate the ice could disappear in summer in 30 to 40 years, said Lars-Otto Reiersen, head of the Arctic Monitoring and Assessment Programme.

"But there are models that indicate 2015 as an extreme," he said.

A precipitous decline in the extent of the ice in recent years has outpaced projections by a U.N. panel of experts in 2007 that indicated a near-complete loss in summer by the end of the century.

Peter Wadhams, a professor of ocean physics at Cambridge University, said that a prediction he made in 2008 that the ice could be gone in 2015 because of global warming was looking cautious.

"It could even all go this summer," he said. "So I think the 2015 date is now looking a bit conservative. We may end up having an ice-free summer before then."

He said that the thickness of the ice - not just the extent floating on the sea that many researchers focus on - had declined unexpectedly quickly. That meant the volume of ice was down to about 30 perent of its amount three decades ago.

The ice shrank to its lowest extent since satellite monitoring began in the late 1970s at 4.10 million square km (1.58 million square miles) on Aug. 26, according to the National Snow and Ice Data Center (NSIDC).

The melt, below the minimum extent set in 2007, may continue well into September.

The shrinking ice itself can stoke climate change. As the white, reflective ice retreats, it opens up darker water that soaks up more and more heat, adding to global warming caused by a build-up of greenhouse gases.

"If it shrinks to zero you are decreasing the albedo (reflected sunlight) of the Earth. That's the same warming effect of 25 years of additional carbon dioxide," Wadhams said.

Most experts are more cautious about the pace.

A study this weekend in the journal Geophysical Research Letters, whose authors included NSIDC experts, said that some models projected virtually ice-free conditions by 2020, others by the end of the century.

"A seasonally ice-free Arctic Ocean within the next few decades is a distinct possibility," they concluded.

"We just don't know exactly why this is moving so fast," said Robert Corell, head of the Global Environment Technology Foundation based in Arlington, Virginia. He said that he believed that the ice would probably last into about the 2030s.

The shrinking ice, also affecting wildlife such as polar bears, does not just influence the sea. Ward Hunt Lake at the northern tip of Arctic Canada had a permanent ice cap that was measured as 4.2 metres thick in the summer of 1953.

"Last year we observed the disappearance of all of the ice and the lake had open water for the first time in recorded history," said Warwick Vincent, director of the Centre for Northern Studies at Laval University in Quebec.

The sea ice freezes out again in September, reaching a maximum towards the end of the northern winter in March.

A related problem to thickness is that there is little of the hardest ice that survives several seasons. And ocean currents and winds may be changing, bringing warmer water and air north.