The discovery challenges currently held theories that black holes and their host galaxies grew in relative lockstep over the eons. 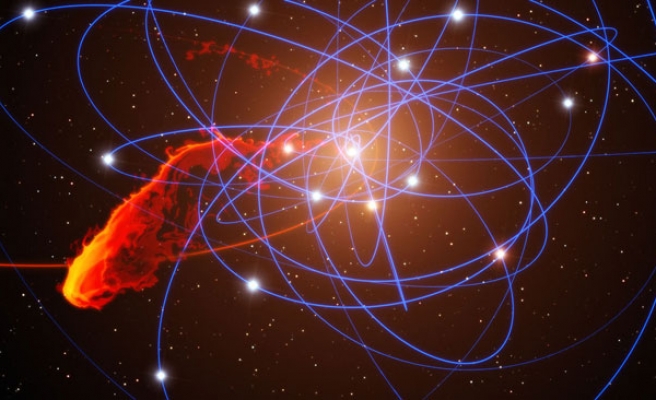 A black hole 12 billion times as massive as the sun has been found in a glowing quasar that existed when the universe was just a fraction of its current age, scientists said on Wednesday.

The discovery challenges currently held theories that black holes and their host galaxies grew in relative lockstep over the eons.

Found within the distant celestial bodies called quasars, black holes are regions of space so dense with matter that not even light can travel fast enough to escape their gravitational pits. Black holes are detected by effects they have on nearby galaxies, stars and dust.

The newly found black hole contains the equivalent of about 12 billion suns, more than twice the mass of previously found black holes of similar age, said researcher Bram Venemans with the Max Planck Institute for Astronomy in Germany.

By comparison, the black hole lurking at the center of the Milky Way galaxy has about 4 million to 5 million times the mass of the sun.

Scientists cannot explain how the newly found black hole grew so quickly. Theoretically, it could not have fed off surrounding gas as fast and as long as it would have needed to reach its massive size under currently understood laws of physics.

"Our discovery presents a serious challenge to theories about the black hole growth in the early universe," lead researcher Xue-Bing Wu with Peking University in Beijing, wrote in an email.

"It may require either very special ways to grow the black hole within a very short time or the existence of a huge seed black hole when the first generation stars and galaxies formed. Both are difficult to be explained by the current theories."

Another option is that two massive black holes in the early universe collided, forming an even larger black hole, Venemans said.

Clues may come from the quasar itself, which is glowing brightly enough to illuminate interstellar matter between itself and telescopes on and orbiting Earth. Ancient quasars may provide information about how stars formed in the early universe.

The research is published in this week's issue of the journal Nature.