By comparison, the Perseus cluster forms stars at a rate about 20 times slower than Phoenix. 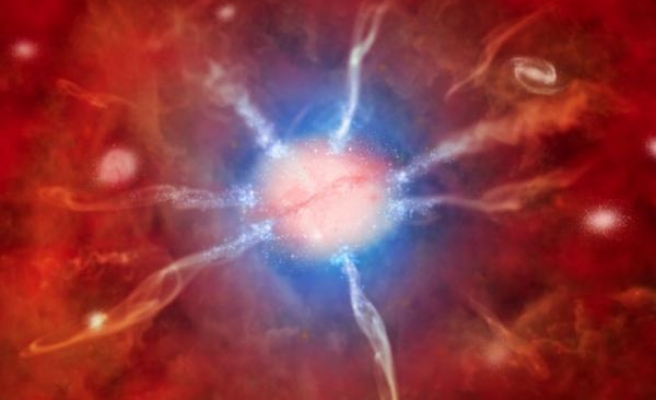 A massive so-called galaxy cluster, one of the largest structures in the universe, has been discovered about 5.7 billion light years from Earth and credited with setting several important new cosmic records, U.S.-based researchers said on Wednesday.

The Harvard-Smithsonian Center for Astrophysics said in a news release that observations of the cluster, which has shown a prodigious rate of star formation, may force astronomers to rethink how such colossal structures and galaxies that inhabit them evolve over time.

Known officially by an alphabet soup of numbers and letters as SPT-CLJ2344-4243, the cluster has been nicknamed "Phoenix," after the mythological bird that rose from the dead.

That's partly due to the constellation in which it lies. But Michael McDonald, a Hubble fellow at the Massachusetts Institute of Technology, said the Phoenix was also a great way of thinking about the latest astronomical marvel.

"While galaxies at the center of most clusters may have been dormant for billions of years, the central galaxy in this cluster seems to have come back to life with a new burst of star formation," said McDonald, the lead author of the paper on Phoenix, appearing in the Aug. 16 issue of Nature.

Based on observations from NASA's Chandra X-ray Observatory, the U.S. National Science Foundation's South Pole Telescope and eight other observatories, researchers said the center of the Phoenix cluster had been linked to the creation of about "740 solar masses" or stars a year.

By comparison, the Perseus cluster forms stars at a rate about 20 times slower than Phoenix.

"This is just an enormous rate," said Marie Machacek, an astrophysicist at the Smithsonian Astrophysical Observatory. She said huge clusters like Phoenix are thought to host thousands of galaxies and there was still a lot to learn about what goes on within them.

Supermassive black holes in the central galaxy of a cluster have long been associated with low observed star formation rates, as they pump energy into the system and prevent the cooling of gases needed for the creation of stars.

But researchers said the "massive starburst" seen in Phoenix, as it gave birth to about two stars per day, suggested that its central galaxy's black hole had failed to interfere with an extremely strong cooling flow.

"Stars are forming in the Phoenix cluster at the highest rate ever observed for the middle of a galaxy cluster," the Harvard-Smithsonian Center for Astrophysics said in its press release.

"The object also is the most powerful producer of X-rays of any known cluster and among the most massive. The data also suggest the rate of hot gas cooling in the central regions of the cluster are the largest ever observed," it said.