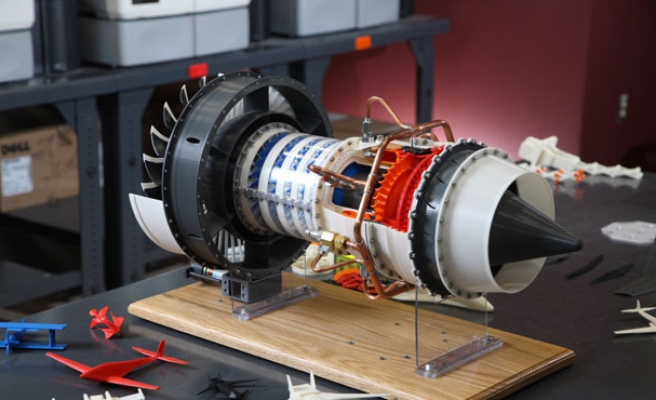 Engineers at Monash University and its commercial arm are making top-secret prototypes for Boeing Co, Airbus Group NV, Raytheon Co and Safran SA in a development that could be the saviour of Australia's struggling manufacturing sector.

"This will allow aerospace companies to compress their development cycles because we are making these prototype engines three or four times faster than normal," said Simon Marriott, chief executive of Amaero Engineering, the private company set up by Monash to commercialise the product.

Marriott said Amaero plans to have printed engine components in flight tests within the next 12 months and certified for commercial use within the next two to three years.

Australia has the potential to corner the market. It has one of only three of the necessary large-format 3D metal printers in the world - France and Germany have the other two - and is the only place that makes the materials for use in the machine.

It is also the world leader in terms of intellectual property (IP) regarding 3D printing for manufacturing.

"We have personnel that have 10 years experience on this equipment and that gives us a huge advantage," Marriott told Reuters by phone from the Avalon Airshow outside Melbourne.

3D printing makes products by layering material until a three-dimensional object is created. Automotive and aerospace companies use it for producing prototypes as well as creating specialized tools, moldings and some end-use parts.

Marriott declined to comment in detail on Amaero's contracts with companies, including Boeing and Airbus, citing commercial confidentiality. Those contracts are expected to pay in part for the building of further large format printers, at a cost of around A$3.5 million ($2.75 million) each, to ramp up production of jet engine components.

Ian Smith, Monash University's vice-provost for research, said it was very different to the melting, moulding and carving of the past.

"This way we can very quickly get a final product, so the advantages of this technology are, firstly, for rapid prototyping and making a large number of prototypes quickly," Smith said. "Secondly, for being able to make bespoke parts that you wouldn't be able to with classic engineering technologies."