The impressive rack may be tied to attracting mates, intimidating or warring with intruders or cooling the brain, said Sampson, vice president of research and collections at the Denver Museum of Nature and Science. 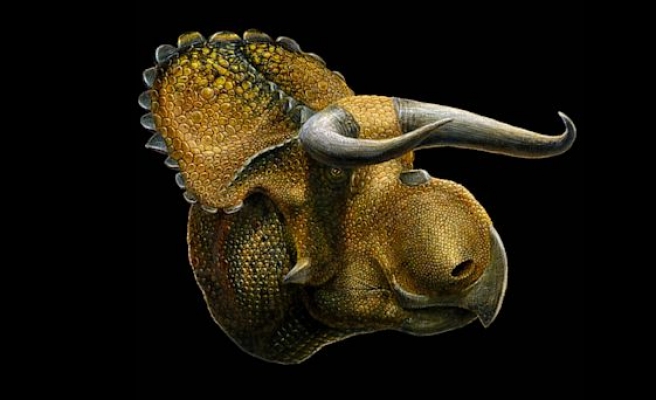 A big-nosed dinosaur that may have used its impressive horns as a mate magnet and to ward off competitors has been unearthed in a fossil-rich deposit in southern Utah, scientists said on Wednesday.

The novel species, Nasutoceratops or "big-nose horned face," is the only known member of a group of dinosaurs thought to have lived 76 million years ago on a land mass in Western North America isolated by an ancient seaway, said Scott Sampson, one of the paleontologists who discovered the extinct reptile.

The new animal, described in the current issue of the British scientific journal Proceedings of the Royal Society, is from a previously unknown branch of horned dinosaurs and stands out for horns that extend over its eyes toward the tip of a prominent nose, Sampson said.

"This animal is bizarre. It takes horns to another level," he told Reuters in a telephone interview.

The impressive rack may be tied to attracting mates, intimidating or warring with intruders or cooling the brain, said Sampson, vice president of research and collections at the Denver Museum of Nature and Science.

The outsized, cold-blooded creature used a beak-like mouth to crop tropical plants, which it chewed with hundreds of teeth that were replaceable like a shark's, he said.

The find in the Grand Staircase-Escalante National Monument in Utah provides the strongest evidence that the southern portion of ancient Western North America was home to its own diverse dinosaur community.

Dramatic exposures of rock from the age of dinosaurs at the Grand Staircase-Escalante have in the last 13 years led to "a completely new dinosaur assemblage we didn't even know existed," Sampson said.

Roughly 20 dinosaur types have been found at sites in southern Utah, upending the notion that there were no new frontiers for paleontologists.

"Many thought we had found all the things we were going to find but we're just beginning to scratch the surface and understand the world of dinosaurs," Sampson said.

Jack Horner, curator of paleontology at the Museum of the Rockies in Montana, said the research was based on collection of limited physical evidence that by its nature raises key questions that still needed to be answered.

He said he and some colleagues have entertained alternate theories that some new dinosaur finds may actually represent different developmental stages of known species rather than new ones, but could not speak directly on the Utah find.

"In most of science, we need quite a few data points to formulate a hypothesis about anything having to do with biology," he said.