The largest of the two Phoenix Towers planned for Wuhan, the capital of Hubei province in central China, will be the tallest tower in the world being one kilometer (0.6 miles) high. 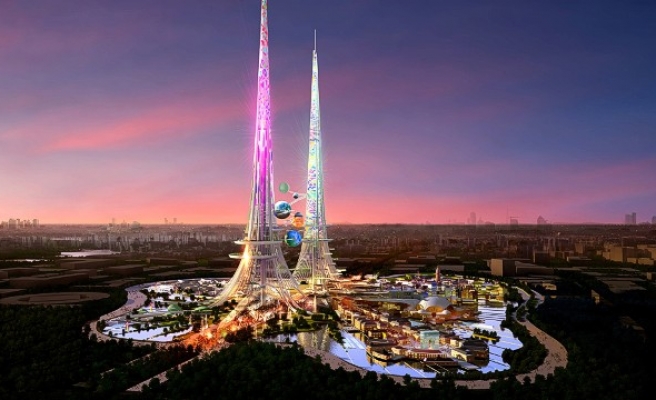 Architects have revealed plans to build something even bigger just days after the construction of a world-beating 838-meter tower in Changsa in central China began.

The largest of the two Phoenix Towers planned for Wuhan, the capital of Hubei province in central China, will be the tallest tower in the world being one kilometer (0.6 miles) high.

It is planned that the towers will be pink and super environmentally friendly.

"Yes, [they are pink]," Laurie Chetwood of UK-based design firm Chetwoods Architects tells CNN.
"They reflect the spectacular colors of the sunsets in the region."

It is designed to sit on an island in a lake and will be 172 meters (564 feet) taller than Burj Khalifa in Dubai. However, the project is still awaiting government final approval.

Wuhan is located on the Yangtze River with a population of 9.7 million in 2012, which has a major transportation hub that's been called "the Chicago of China."

"[We were asked] to create an iconic building for Wuhan, which embodied a strong environmental and social content as well as reflecting Chinese tradition," says Chetwood.

Three large spheres suspended between the towers contain celestial-themed restaurants and will be accessible via "skywalks".

According to designers the spheres "represent planets orbiting the Towers.”

"You'll have a French street, a Japanese street, a Turkish street and so forth ... to allow people to see the world without necessarily having to leave China," Chetwood told the Guardian.

The towers are designed to be able to generate enough power to fulfill their own needs and those of neighboring areas.

"The Feng tower uses cutting-edge technology to 'feed' the Huang tower with renewable power in a symbiotic process," the design firm said in a statement.